For the second time in three years, the Jackets have beaten the University of Georgia in football. With the 28-27 win over the Bulldogs, Tech finishes its regular season with an 8-4 record, having won five of their last six games.

Words cannot describe how big of a win this was for coach Paul Johnson and the Tech football program. After a disappointing 3-9 season last year, the team took a big step in the right direction this season.

The Jackets got off to a quick start as senior quarterback Justin Thomas found sophomore A-back Clinton Lynch on a pitch for a 41-yard touchdown run. Big plays have been the story for Tech’s season this year, and Lynch has been Tech’s biggest playmaker all season. 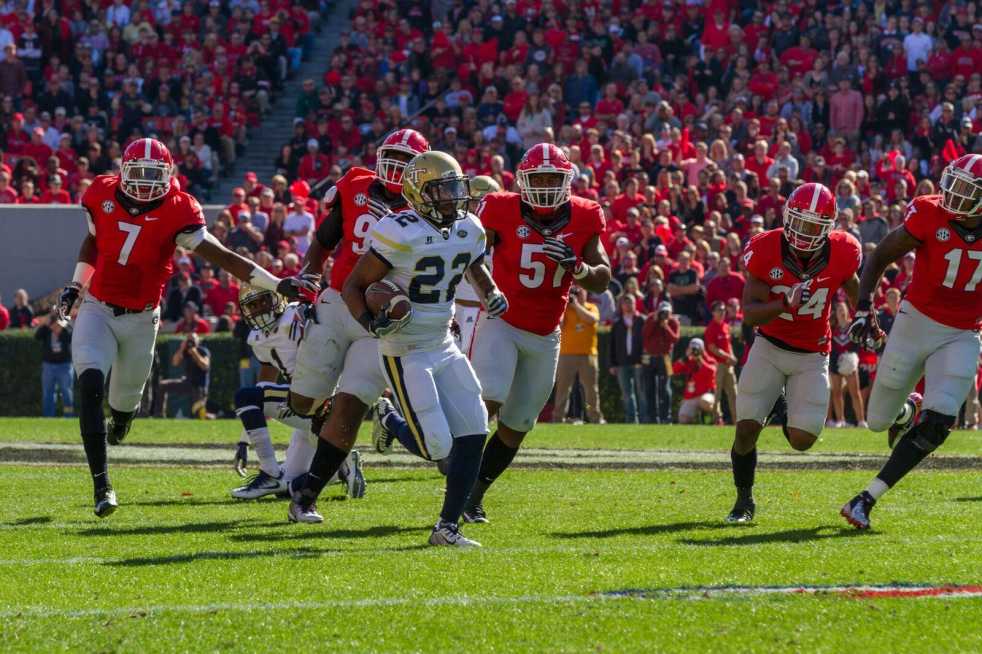 However, the Bulldogs answered back and tied the game on a 10-yard run by sophomore running back Sony Michel.

After exchanging punts, the Tech offense struck quickly again. On the first play of the drive, Thomas found sophomore wide receiver Brad Stewart for a 64-yard gain. Tech scored two plays later on a run by sophomore B-back Marcus Marshall. It was Tech’s second scoring drive in under two minutes. 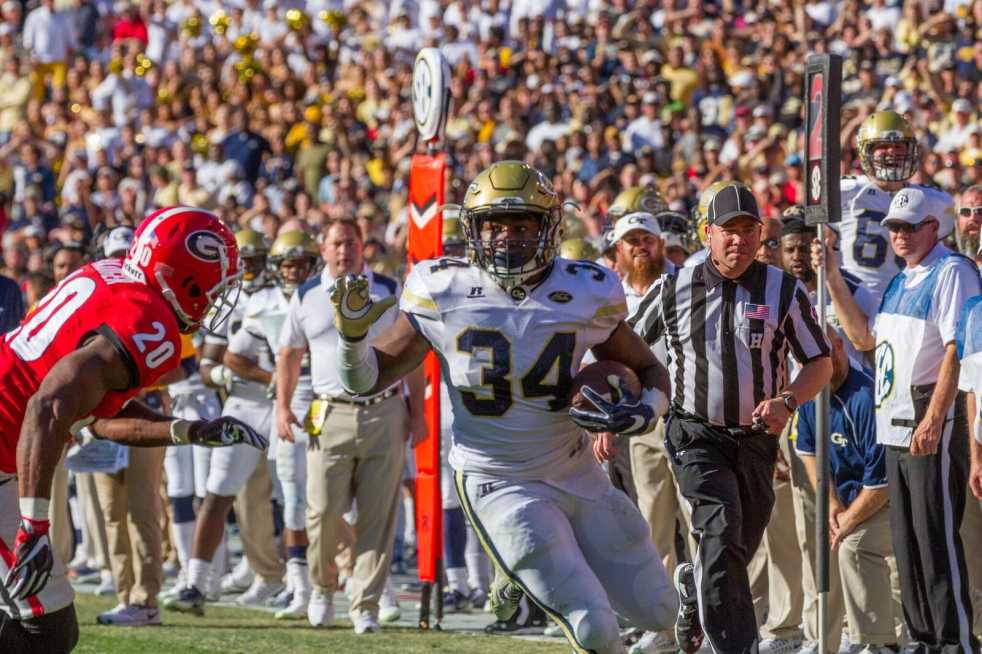 B-back Marcus Marshall brought it up to 14-7. // Photo courtesy of Tyler Meuter

For the second straight time at Sanford Stadium, Tech and Georgia entered halftime tied. And just like last time, Tech fumbled on their opening drive.

It was not the third quarter coach Johnson and his team had envisioned, as the Jackets gave up 13 points, entering the fourth quarter down 27-14.

Tech had overcome adversity many times this season, and that trend would continue. After being stopped on five straight possessions, the Jackets woke up. Thomas hit Lynch and sophomore A-back Qua Searcy on big pass plays. True freshman B-back Dedrick Mills capped off the drive with his 11th touchdown run of the year.

Tech had cut the Bulldog lead to six with 6:28 left in the game. Tech now had momentum on its side, and the Jackets’ run defense was steadily improving as the game wore on.

On a second-and-eight from the UGA 40-yard line, UGA freshman quarterback Jacob Eason threw an interception to junior cornerback Lance Austin. It was Austin’s second interception in the last two weeks, and the play set up Tech at the 46-yard line, down six with 3:20 remaining in the game.

Tech now had a chance to win the game with a touchdown. On third-and-six from the 6-yard line, coach Johnson called a trick play. The play was designed to be a pass by the A-back back to the quarterback. Upon catching the toss from Thomas, Searcy squared up to throw, but Thomas was not open. 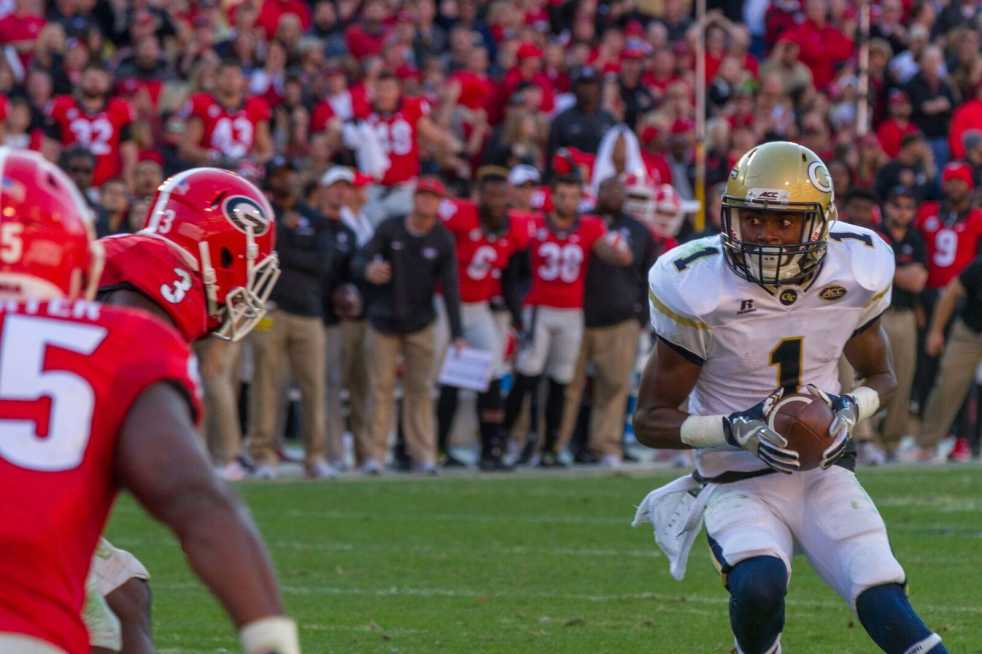 When the play unraveled, A-back Qua Searcy had to improvise, 21-27 at the pictured moment. // Photo courtesy of Tyler Meuter

With little time left, Searcy cut back to the middle of the field and went airborne from the 3-yard line to score the game-winning touchdown. The play is now being referred to as the “Quantum Leap” and will surely be a play shown in Tech highlight reels. 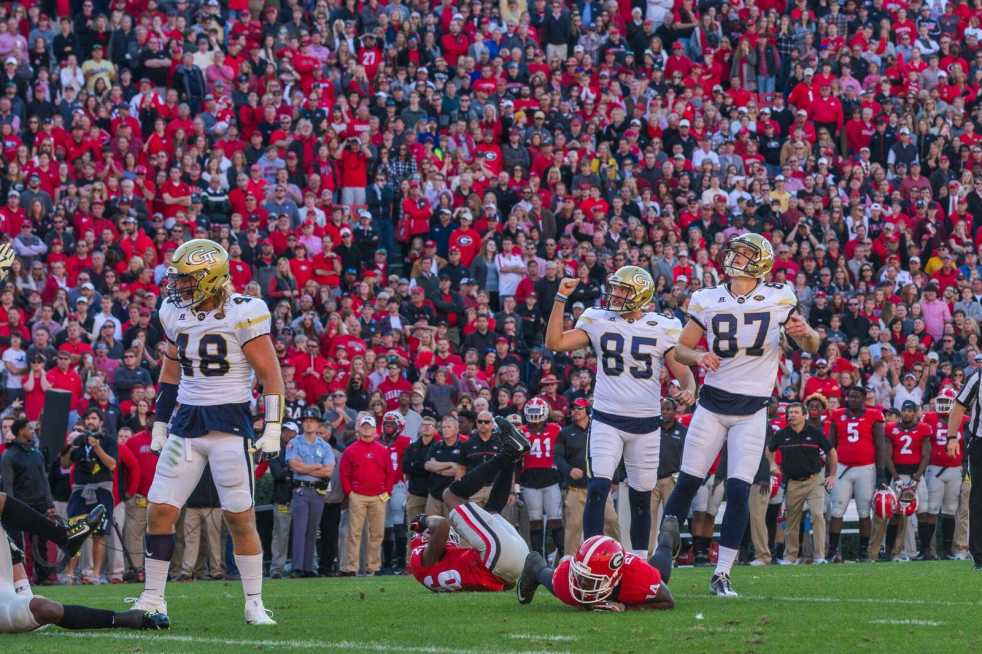 Just like last week, the game ended with an interception by sophomore linebacker Brant Mitchell, and the Jackets stormed the field in celebration. Hedges were torn. Tears were shed. The Jackets proudly planted the GT flag in the middle of the field. With the win, coach Johnson became the first Tech coach since Bobby Dodd to win three games at Sanford Stadium. Johnson now has a 3-2 record in Athens and has once again silenced his critics. The Jackets finished the game with 390 yards of total offense, 160 of which came from Thomas’ arm.

Tech will have to wait until next Sunday to find out what bowl game they will participate in. The Jackets will carry a lot of pride and momentum into that game.