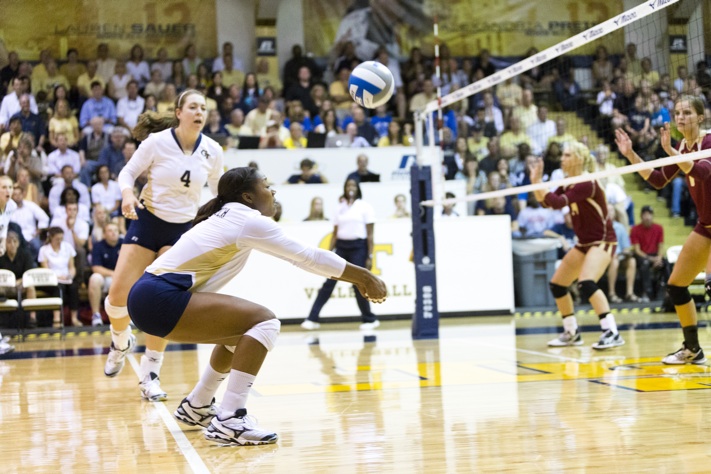 Tech had a rough outing in Virginia over the weekend as they lost to Virginia and Virginia Tech in ACC conference play.

On Friday, Nov. 2, the Jackets traveled to Charlottesville, Va. to face an under-performing Virginia squad that had just recently notched its first ACC victory of the season. After taking control early in the match, the Jackets lost some of their luster and despite senior rightside hitter Monique Mead’s 22 kills and 10 digs—the eighth double-double of Mead’s senior season—Tech fell to Virginia in five sets. Mead also contributed two aces in the match putting her into fifth place all time at Tech with a total of 144.

Junior setter Kaleigh Colson guided the offense well, recording 58 assists in the match. Tech attacked at a 29 percent clip but allowed Virginia to score at a 39 percent rate, which ultimately was the governing factor in the victory.

It looked as though Tech would be in control after a first set victory, but the Cavaliers led almost the whole way in the second set which helped turn the tables for a young Virginia squad.

The game also featured 31 ties and seven lead changes. With the loss, Tech dropped to 16-9 overall and 7-7 in conference play as the team lost to Virginia for the first time since 2007.

On Saturday, the Jackets fell to host Virginia Tech 3-1 in Blacksburg, dropping them into a tie with the Hokies at 7-8 in the conference. Hunter had 18 kills and 10 digs, besting Mead’s previous team high of eight for the season.

Tech couldn’t find anything substantive until the third set, but by that point Virginia Tech’s momentum was enough to seal the victory in the fourth set. Meyer added 23 digs for the Jackets and senior Annie Czarnecki added three blocks. Tech attacked at a dismal 14 percent clip, but performed better on defense only allowing the Hokies to score on 28 percent of their shots.

A big factor in the loss was the Hokies’ 28 blocks compared to Tech’s nine. The Hokies completely controlled the net and pace for most of the match, leaving Tech in a position of having to play catch-up.

Colson lead the team with 36 assists and now ranks No. 9 all time in career assists in Tech history. Still, the Jackets fell to 16-10 with a 7-8 mark in the conference and will need a strong late-season run to solidify their postseason chances.

The Jackets returned to O’Keefe Gym on Thursday, Nov. 8 at 7 p.m. to take on North Carolina in the annual white-out game prior to publication. Tech will also face ACC opponent N.C. State at home on Nov. 10 at 7 p.m. The Jackets lost to both teams earlier in the season, losing 3-0 to the Tar Heels and 3-2 to the Wolfpack.