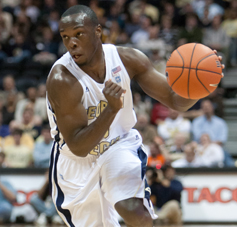 With the possibility looming that the Tech football team breaks its 15-year streak of bowl appearances this season, the outlook on Tech athletics has been glum this fall. But on the corner of Fowler and Tenth Street, Head Coach Brian Gregory and the men’s basketball team are quietly preparing to give fans something to be excited about. And no, it’s not just the opening of McCamish Pavillion this weekend.

Last season’s 11-20 record overall and 4-12 conference record in Gregory’s debut as a coach may come across as upsetting, but it could be argued that measurable progress was made. Tuned-in fans could see progress on the offensive side of the ball with drawn-up plays being executed as opposed to the dreaded confusion that Tech fans were used to. Unfortunately, the offense struggled to put the ball in the hoop through the entire season—finishing at the bottom of the ACC in field goal percentage. The Jackets should continue to improve on that end of the ball with players becoming more accustomed to Coach Gregory’s fast-paced system.

What Tech fans should really be getting excited about is the defensive identity that Gregory created surprisingly quickly for this team. During the 2010-11 season—former head coach Paul Hewitt’s final season at Tech—the Jackets finished No. 222 in the nation in defensive field goal percentage. In just one season at the helm, Gregory gave this depleted roster—which had lost top defender Iman Shumpert—a hard-nosed, defensive reputation as it dramatically improved to the No. 35 ranked field goal percentage nationally. Just for reference, there are 337 other Division I NCAA basketball teams.

At a quick glance, the defense may have not appeared to perform so well. After all, in the Jackets’ 13 ACC losses, the Jackets were outscored by an average margin of 11.8 points per contest. What actually makes the Jackets’ defense more impressive is how terrible they shot and handled the ball on their offensive possessions. The Jackets ranked No. 212 nationally in field goal percentage last season, just shooting under 43 percent in their 31 games. Ironically enough, it seems that the best way for the Jackets to improve their defense is to become more efficient on the offensive end.

As well as this, point guard Mfon Udofia struggled with turnovers last season, posting 85 on the season, compared to his 88 assists. Udofia began to show he had a better grasp on the offense towards the end of the 2011-12 season, and Gregory is hoping for more effective play out of his senior point guard this year. Udofia isn’t the only one to blame in the turnover department, though, as the team as a whole averaged almost 15 turnovers per game.

While the Jackets are projected to finish ninth in the ACC this year, I think it is entirely possible that we could see this team surprise some people along the way. Tech is in the unique position of returning all five of its starters from the end of last season and should only improve upon its defensive, gritty reputation. Gregory and his staff signed a solid recruiting class led by freshman power forward Robert Carter. Carter should be able to contribute immediately to the team, and along with redshirt junior center Daniel Miller and redshirt junior small forward Kammeon Holsey should improve the Jackets’ presence around the basket as well as their ability to rebound effectively.

I personally think the Jackets can win up to nine of their 18 conference games this season if they improve upon the offensive end, and even potentially pull off an upset against a team like UNC or N.C. State. Fans should be patient with this team though, because the culture being created in Gregory’s locker room is one that could make Tech a nationally respected team in the future.