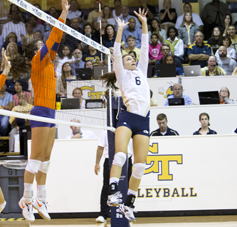 [/media-credit]After losing at home for the first time all season, the volleyball team split two ACC matches on the road over the weekend, losing to the Maryland Terrapins 3-2 on Friday before downing the Boston College Eagles in straight sets on Sunday. The split brings the Jackets to a 16-8 overall record and a 7-6 mark in conference play.
The Jackets kicked off the road trip with a thrilling first set in Maryland that saw fifteen tied scores and six lead changes en route to a 31-29 Tech win. Neither team led by more than three points during the set, and once the score entered the twenties it was a back and forth affair. Maryland faced set point three times, but each one was extinguished until the score was tied at 29. A service ace by senior rightside hitter Monique Mead put the set point in Tech’s favor, and a handling error by the Terps on the next play sealed the deal.
The Terrapins jumped out to an early 10-6 lead in the second set and was able to maintain it to win the set 25-20 and tie the match 1-1. They took a 2-1 lead in the match after a tight third set in which the Jackets never trailed by more than two points.
They also had a lead early in the fourth set, but four kills by junior outside hitter Jennifer Percy in seven volleys tied the set at seven. Tech scored five straight from there, but Maryland came back to tie the set at fifteen. Two straight kills by Mead put Tech on top for good as they took the set, 25-21.
Maryland built upon early momentum in the fifth and final set, jumping out to a 5-2 lead before taking the set 15-7 and the match, 3-2. Junior setter Kaleigh Colson produced a season-high 57 assists, and redshirt senior outside hitter Bailey Hunter scored a double-double with thirteen kills and ten digs.
Tech then traveled to Boston College and swept the Eagles for the second time this season. The first set started out close as the teams traded points to tie the score at thirteen. The Jackets ignited from there taking the next seven points on their way to a 25-16 victory. They went on a similar run in the middle of the second set, and once again BC could not come back as Tech took a 2-0 lead in the match. The final set was much like the first two, close in the beginning before the Jackets pulled away. This time, Tech took a 20-15 lead after being tied at fifteen all, and would soon win the set, 25-22, and match.
Hunter achieved another double-double in this match, while Colson and Nicki Meyer each put up double-digit digs. Colson also notched 38 of the team’s 44 assists. On the other side, Courtney Castle and Cassidy Vaughn each had seven kills to lead BC, who hit a combined .078 as a team.
The Jackets will be on the road again this weekend with matches at Virginia on Friday and Virginia Tech on Saturday. Virginia currently sits at 1-12 in ACC play and 7-17 overall. Meanwhile, Virginia Tech is right below Georgia Tech in the ACC standings at 6-7,13-10 overall.