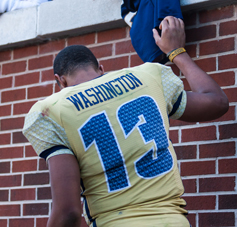 [/media-credit]As a school dedicated to technology and the pursuit of progress in the sciences, Tech’s athletic ways seem to be stuck in the inflexible past. When Tech founded the Southern Intercollegiate Athletic Association in 1895 and started competing with other schools athletically, it was a small school created to help rebuild the south during the Great Reconstruction period of America. College football was not the multi-billion-dollar industry it is today and an athlete’s priorities were certainly incongruous with those of what one would find today. In other words, Tech began its history of success and athletic dominance in times that were much different than these. However, unlike many history-laden programs around the country, Tech has made the choice not to adapt to the changing college football landscape in the last two decades, and has lost its identity.

As Tech’s entrance as a worldwide academic power became more solidified, Tech began to find itself in a necessary reevaluation period. Does the school continue its ascent into a previously unknown venue of higher education excellence? And if so, would Tech be willing to impose a stricter assessment on the admitted members of the student body? At this crucial crossroads in school history, Tech slowly began making the choice supporting academic evolution. After President Edwin Harrison and Coach Bobby Dodd pulled Tech out of the SEC in 1964, this academic growth began to take shape.

The biggest growh has occurred in the years since Tech’s most recent National Championship in 1990. Tech’s huge spike in national and worldly excellence in that span has made the school one of the toughest public schools to break into. Today’s entrance requirements make it almost impossible to recruit the way Tech used to, cutting the available recruits by almost fifty percent.

According to a study done by the National Center for Education Statistics in 2009, the average GPA of a high school senior is a 3.0. And according to another study conducted by the AJC in conjunction with U.S. News in 2008, Tech’s football players had the best average SAT score and high school GPA of any team in the nation.

Add the fact that a high school senior only needs a 2.0 GPA to be eligible to play Division I football and the average GPA for college football players is a 3.0, and it’s not hard to see the bind that Tech is in.

Quite frankly, the championship teams of the past competed for a school very different than the one we find ourselves in today. The athletic facilities are world class for the most part, and Tech has done a phenomenal job getting highly intelligent student athletes who can play at a high level, but for every Sean Bedford that exists in this country, there are five high-level athletes who wouldn’t be able to get into Tech.

And to be honest, that’s what we are. We are the only technology based university that is consistently ranked in the top 10 public universities in America. And unless Tech decides to add colleges, departments, or change the entrance requirements, it’s what we’ll always be. But somewhere in this gradual increase in academic prestige, there became a disconnect between the school’s vision and the average fan’s vision.

Tech went from a national football powerhouse to a mediocre football institution in the middle of one of the most fertile recruiting grounds in the country. Instead of being able to attract the numerous five-star athletes in its own backyard, Tech watches as South Carolina, Georgia, and Clemson steal the homegrown goods. Naturally, the fan base started to become frustrated with this shift, calling for the jobs of everyone involved with the program. But the truth is that as long as Tech stays true to its academic vision, it will never be able to compete in the recruiting game.

So for all the tradition and excitement that has surrounded Tech for over a century, we come to a crucial time in the future of the school. Will our ultimate identity be that of an academic institute with an exceptionally impressive athletic program despite the stringent entrance standards? Or will the fan’s frustration with mediocrity cause a shift in philosophy that attempts to merge two highly incompatible ideals and strive to compete more consistently on the football field? If the fans get their way, Tech will need to realize that Bobby Dodd stadium is no longer an attractive venue for the modern athlete, while finding ways to get more consistent attendance at home games. Tech will need to add broader and less specialized colleges such as English and General Education. And Tech will need to play up the many opportunities for a student-athlete in Atlanta. The average national student-athlete has been showing signs of improvement in the classroom, and maybe one day this will not be problematic, but in the get-rich-fast age that we live in, shortcuts are becoming more of the norm and college football is becoming more about the money. So next time you attend a Tech game, remember this: Those men on the field represent the cream of the crop of what a student athlete really is. Are you willing to celebrate this amazing accomplishment and accept Tech for what we are? Or do you want to compromise the direction of the school and choose a new athletic path for success?

Now is the time for Tech fans to choose their ultimate identity.