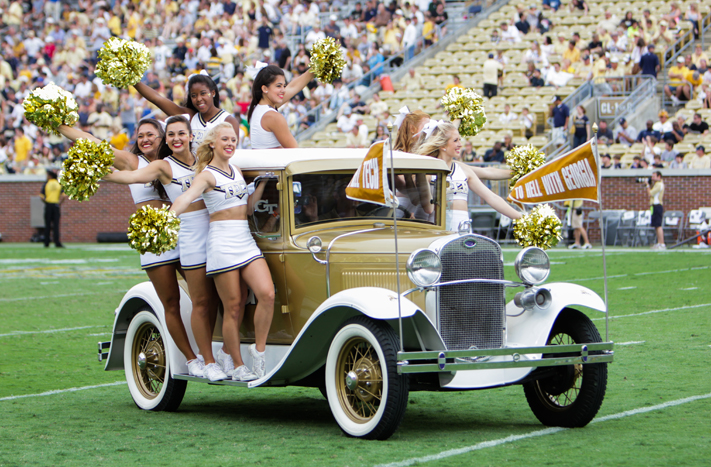 [/media-credit]The Ramblin’ Reck has come to be one of the most recognized parts of the classic Tech game day, and has been a constant feature on campus and around Atlanta for 51 years since its induction to Tech tradition in 1961. While any Jackets fan would recognize the Reck immediately, one person many Tech followers do not always recognize is the Reck driver.

Stephen Webber, a fourth-year BA major, is the current Reck driver for the Ramblin’ Reck Club. The club is completely entrusted with taking care of the famous car, and does so with unmatched enthusiasm and care.

Webber was elected as driver and began serving his position the first day of spring classes this year, and will finish his Reck driving career on the first day of the spring term in 2013. As football season did not start until well into his term, Webber had plenty of time to get ready for his first drive onto the field.

“Past drivers have told me the eight months leading up to football season are my practice for driving on to the field. There’s nothing like trying to get to second gear before you get to the banner and hoping you don’t run over anyone on the other side,” Webber said.

The Reck is always a staple at every home football game, and preparation for the event begins on Friday. Members of the club begin working in the afternoon washing, polishing, waxing and shining the car, while Webber does work under the car and checks the oil levels and brakes. The knowledge of how to take care of the car has been passed from driver to driver each year, and when all the work is done, Webber and club members like to go for a joy ride around campus.

On game days, the Reck travels from tailgate to tailgate, stopping for pictures and usually a free lunch. The first official appearance of the Reck is at Yellow Jacket Alley two and a half hours prior to kickoff, when the players and coaches first arrive to campus and walk through a tunnel of fans to the stadium. An hour before the game, Webber drives the Reck down the hill, leading the band to the stadium, and then waits for kickoff.

“When everyone is having fun, I’m just waiting for the game to start. It’s pretty nerve-wracking for me in the tunnel. I cross my fingers every time I kick the starter in. The Reck hasn’t missed a home game in 51 years—that’s a lot of pressure,” Webber said.

When the Reck is not at Tech athletic events, the car frequents weddings, retirement parties, and other Tech events.

“During the summer I had a wedding every weekend. A lot of times what I’ll end up doing is taking it to the reception and let people take pictures with it. Usually the bride and groom will come out [and] hop in the rumble seat, and I’ll drive them to their hotel,” Webber said.

Webber’s most memorable experience as Reck driver so far was for a funeral for a gentleman that passed earlier in the year. Although the man planned his own funeral, it was not in his plans for the Reck to be there.

“I got a call from George P. Burdell and he asked if I could be there, so I went. His wife came out when I honked the horn before the funeral started, and she gave me a hug and told me if there was any place the Reck should be it was there,” Webber said.

The Reck is loved by students, alumni, and fans alike, and Webber does not take lightly the privilege of being the only person with the keys to the car.

“I joke that it’s my girlfriend. I spend a lot of time with it,” Webber said.

With a girlfriend that has not missed a football game in 51 years and a driver as passionate as Webber, the only thing that could break up this dynamic duo are re-elections.