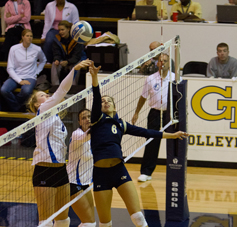 [/media-credit]Since a dominant 11-2, 3-0 in conference, start to the season, the Jackets’ volleyball squad has dropped to 15-7, 6-5 in conference. Last week the Jackets knocked off UGA for the seventh straight time but lost two big conference matches to Miami and Florida State.

In the UGA match, the Bulldogs got out to a fast 9-7 first set lead and, despite several threatening occasions, Tech could never quite close the gap.

In the subsequent frame, Tech rallied from an early 8-4 deficit and drew even at 12-12. The Jackets seized the lead on the very next point thanks to a kill by senior Monique Mead. After UGA tied the set at 21, Mead recorded another kill and finished things off with two serving aces.

The Jackets continued to start slowly, as they fell behind 7-3 in the third set; however, they would quickly recover to go on an 11-6 run, taking the lead by a count of 14-13. Tech did not look back from that point forward, claiming the set 25-19. The fourth set saw eight ties and two score changes. Tech gained an early four point advantage which was just as quickly lost as it was reclaimed, and the Jackets came out on top with a 21-25, 25-21, 25-19, 25-22 victory.

The first set against FSU featured 21 tied scores and 11 lead changes en route to a 35-33 Jacket triumph. Tech found itself in a five-point hole midway through the second, but fought to a 23-23 draw. Needing big points to close out the set, sophomore outside hitter Courtney Felinski put away a kill and Mead hammered home one of her two serving aces on the day, and the Jackets took a comfortable 2-0 match lead.

However, FSU then went on a 12-2 run to capture the third set. Attacking errors plagued Tech for the remainder of the match as they lost the final two sets, marking their first home loss of the year.

Tech capped the weekend action against No. 24 Miami. Despite stellar performances from Mead, Czarnecki, and juniors Jennifer Percy and Kaleigh Colson, who combined for 32 kills, the Jackets fell in straight sets. Apart from having set point up 26-25 in the second set, the Jackets never really threatened on the way to a 25-22, 28-26, 25-15 loss.

The Jackets return to action at Maryland on Friday, Oct. 26 and at Boston College on Sunday, Oct. 28.