When the Jackets collapsed at the end of the Miami game on Sept. 22, there was an argument to be made that the loss did not fall squarely on the defense. The offense, after all, managed only four first downs over the final 25 minutes of the game—one of which was the result of a holding penalty—and forced the defense to stay on the field for extensive amounts of time.[media-credit name=”Austin Foote” align=”alignright” width=”711″] 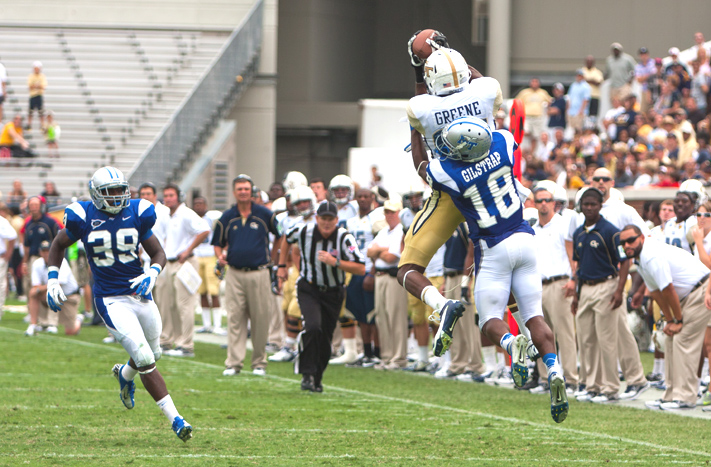 A Sun Belt offense carved up the Tech defense for 49 points and 510 yards thanks to missed tackles and schematic mismatches throughout the game. With Tech trying to defend multiple receivers out of its base 3-4 formation, MTSU had receivers matched up against linebackers and capitalized in both the passing game and the running game, and Tech struggled to line up tackles and wrap up the ballcarrier throughout the game.

“That’s probably as bad a tackling game as I have seen.  When you do that and turn the ball over, you get beat.  We really haven’t tackled very well for the last two weeks now,” said Head Coach Paul Johnson, courtesy of ramblinwreck.com.

After the game, redshirt sophomore inside linebacker Quayshawn Nealy guessed that Tech missed 25 tackles in the first half. The actual number is easily in the double digits, and it was hardly confined to the first half. On perhaps the most important play of the game, which took place early in the third quarter, MTSU running back Benny Cunningham brushed aside three would-be tacklers en route to a 23-yard touchdown that gave MTSU a 23-yard touchdown.

That individual play highlighted one of the team’s biggest issues, though. Of the three Tech defenders who made contact with Cunningham during the run, only one attempted a wrap-up tackle, with the others launching themselves at the running back to knock him over.

“We have so many tackling drills in practice and we emphasized it so much. We were prepared to tackle because we practiced it so much, but guys were just missing tackles,” Nealy said.

The overall result was clear on the final stat sheet. Cunningham—who had 91 rushing yards through his team’s first three games—got good blocking from his linemen, broke through the Tech defense almost at will, and racked up 217 yards and five touchdowns on 27 carries. That yardage total marked the most yards Tech had allowed to a single running back since Clemson’s C.J. Spiller ran for 233 yards in the 2009 ACC title game.

To some degree, however, the poor execution was a result of the mismatches that MTSU was routinely able to set up thanks to a scheme advantage.

Tech was playing without two key defenders in junior outside linebacker Jeremiah Attaochu and junior cornerback Louis Young. Coupled with the season-long injury to redshirt sophomore safety Fred Holton, the Jackets were considerably limited, particularly in the secondary. True freshman D.J. White was pressed into action at nickel cornerback due to the injuries.

MTSU, which runs a spread offense that relies heavily on four-receiver sets, took full advantage of this. Over the course of the game, MTSU ran 42 plays using four-wide formations. Since Defensive Coordinator Al Groh chose to rely on more veteran players instead of putting the freshman White on the field to add more speed, Tech’s outside linebackers—redshirt junior Brandon Watts, senior Malcolm Munroe, and redshirt freshman Tyler Marcordes—were routinely forced to cover much quicker slot receivers.

Some of MTSU’s clearest success occurred when the Blue Raiders’ offense lined up in stacked receiver formations. On 18 occasions, the MTSU offense lined up with one receiver lined up behind another on one or both sides of the field. In every instance, Groh deployed Tech’s base 3-4 set against the formation, and this created severe problems for the outside linebackers.

By trying to hover between the box in the middle of the field and the receivers toward the sidelines, Watts, Munroe and Marcordes were unable to effectively defend anyone. They were out of position in trying to cover the stacked receivers, and they were too far from the play to help in run support.

This made run blocking easier for MTSU and gave the receivers favorable matchups on bubble screens. On screen passes, the MTSU receiver would have a one-on-one matchup and room to run after escaping the defender.

Two questions will be in focus for the defense as it tries to rebound against Clemson: whether or not Tech suffered from the decision to move Groh to the press box and have assistant Joe Speed relay playcalls to the field, and whether or not the return of Young and Attaochu to the lineup will shore up the defense.

To the first point, Tech’s defensive players indicated that the change was not an issue.

“We started practice with Speed calling the plays from practice. Last week we had problems getting the play calls faster and we thought that helped,” Nealy said.

To the second point, Tech’s loss to Miami came with both Young and Attaochu on the field, and Clemson’s offense has been averaging over 510 yards per game through five contests. Young’s return should allow Groh to use a nickel-heavy scheme for the game, but the Jackets will face a tall task if they are unable to pressure quarterback Tajh Boyd and make tackles against the quick Clemson backfield and receiving corps.