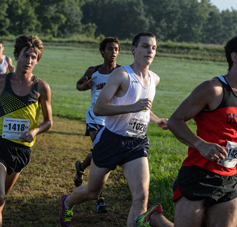 The women’s team was led by sophomore Katie Townsend, who completed the race in 18 minutes and ranked 98th out of 267 female runners. Senior Mary Kate DuBard finished just 13 seconds behind, followed by senior Katie Vance, freshman Carolina Kissel, and freshman Kaylee Isaacs to round out the top five runners for the women’s team.

On the men’s side, junior Alec Clifford led the team with a 25:30 time and 127th place finish, and senior Obiandu Igwe logged his best time of the season at 25:39. Sophomore Jeremy Greenwald was next to cross the finish line for the men just one second behind Igwe, and senior Doug Black and junior Eric Powers also had strong races for the Jackets.

Arizona, ranked No. 12 in the nation, pulled out the victory for women’s teams with 71 points, compared to Tech’s 613, and No. 8 Iona finished first in the men’s competition.

Arizona had the top runners on both sides with Elvin Kibet finishing with a 16:51 5K time to lead the women and Lawi Lalang completing the 8K in just 22:33 to top the men’s field.

The Jackets will compete next in Tuscaloosa, Ala. in the Crimson Classic on Oct. 13.