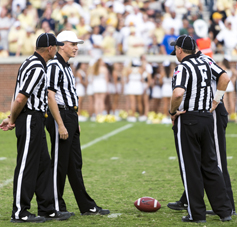 [/media-credit]As a sports fan, it’s often hard to toe the line between booing a bad call and admitting that someone on your favorite team made a mistake. Given the sheer quantity and variety of potential infractions, few sports exemplify this phenomenon as well as football. As soon as the yellow flag is thrown, regardless of the call, the entire stadium sends the referee a collective death glare, utilizing every ounce of restraint from running onto the field and tearing the poor guy to shreds. But how often is this warranted? To what degree will we as fans blindly disagree with an accurate call?

I ask this because, as anyone who has Facebook friends that are even remotely familiar with sports can tell you, the NFL’s interim refereeing corps appeared to be somewhat lackluster. Before the regular referees finally returned to work on Wednesday, this group of replacements made such curious actions as tripping Dallas’s Kevin Ogletree in the end zone after an official threw a hat in his direction, giving San Francisco head coach Jim Harbaugh two free challenges in the second half despite the fact he had no timeouts left, and allowing Seahawks quarterback Russell Wilson to throw a game-winning interception (yes, interception) in Seattle’s 14-12 defeat of the Packers on Monday Night Football. It’s fair to say that these refs are, in fact, terrible.

But maybe everyone focused too intensely upon these individuals because they were “backups.” Moreover, we are quick to forgive veteran officials for making obvious mistakes, on the grounds that they have established themselves within the league. Longtime NFL official Ed Hochuli cost the San Diego chargers a victory in 2008 when he blew a play dead whilst still in progress. Hochuli apologized, and everything was fine. In baseball, umpire Jim Joyce ruled a runner safe at first on what would have been the 27th out of Armando Galarraga’s perfect game even though Galarraga clearly beat the runner to the bag. Joyce was pardoned in the eyes of the public, and Galarraga even got a Corvette out of it.

So maybe we are a little too harsh on the boys in zebra stripes. Let’s take a look at college football—notably a game that many of this newspaper’s readers may have seen. Tech’s disappointing overtime loss to Miami this past weekend centered on two calls.

Following a Miami scoring driving, kick returner Orwin Smith caught the kickoff on the goal line and began to run, but he suddenly stopped and elected to take a knee. However, Smith’s momentum carried him too far, as he was forced to brace himself by putting hand on the ground past the goal line, resulting in a safety which would change the game. The crowd did not appreciate this, and boos poured in from all sides of Bobby Dodd Stadium. Even replays failed to convince Tech fans and likely enhanced the booing—all in spite of the fact the call was accurate based on the rulebook.

The second unsavory call in the eyes of Jackets fans came on the final drive of regulation. Down by seven, Miami was at the Tech 20-yard line when Stephen Morris led his receiver a little too far down the sideline. But Tech cornerback Rod Sweeting interfered with the route and was flagged for pass interference. With Miami now at the ten, running back Mike James could, and did, waltz into the end zone. Yes, the ball was arguably out of reach, but it’s the defensive back’s responsibility to keep his hands off the receiver in that sort of late game situation. The boos resounded again unwarrantedly even though the official who made the call would have been similarly reprimanded for not calling the penalty.

Sports fans get mad when calls don’t go their way. That’s obvious. But just the fact that a ref makes a terrible call, one that might happen to hurt a viewer’s fantasy team, is not enough to incite the kind of fury that many bring to bear at these times. There is a reason the referee is a professional and fans, contrary to their beliefs, are not.