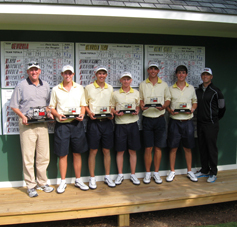 Tech hosted and tied with UCLA to win the PING/Golfweek Preview Invitational at the Capital City Club Crabapple in Alpharetta, Ga. from Sept. 23-25. It was a highly competitive three rounds, as 14 of the nation’s top 25 teams were in the mix.

The No. 4 Jackets went into the final round tied for third, with California only three strokes behind the impressive 36-hole leader, UCLA. However, the Jackets and the Bears managed to capitalize during their final rounds, both posting scores of 276 and setting up a tie for first at a 5-over 845. These two teams put on a clinic Tuesday, finishing eight shots ahead of the defending national champion and runner-up, Texas and UNLV.

Tech redshirt junior Seth Reeves surged on Tuesday, posting five birdies and an eagle for a final-round 66 to finish four under par, only one shot above his career low.

After a poor opening performance last week in Dalton at the Carpet Capital Collegiate, the lefty Reeves managed to convert on the final round, leading the Jackets to snag a tie for first.

Freshman Michael Hines, who tied for 30th, posted a 1-under-par 69 to contribute to Tech’s final round score of 276.

Sophomore Ollie Schniederjans, who tied for 22nd, and redshirt junior Bo Andrews, who tied for 10th managed a respective even-70 and 1-over 71 for Tech. Individually, Reeves finished atop his team in an eight-way tie for 2nd place after the final round.

Tech will return to play on Oct. 5, hoping to defend their 2011 title at the Brickyard Collegiate Championship in Macon, Ga.