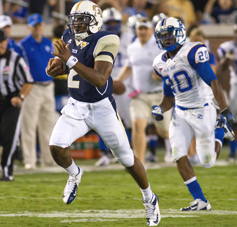 2009 was a special year. As an incoming freshman from just outside of Philadelphia, PA, I knew nothing about Tech athletics. Sure, I knew the mascot, I had heard the fight song, I had watched some games, but I had not really known what type of athletic institution I was becoming involved with.

After reading Matt’s article a few weeks ago, I got to thinking. Why do we have such disdain for Tech sports? With a rich tradition and our location in the heart of Atlanta, not to mention the need for something outside the rigors of the school, Tech sports should be something savored much more at this school. Maybe I am being fanatical, but maybe I am not.

During my freshman year in 2009, Tech arguably had the greatest year in its sports history. All but three teams were ranked in the top 25 nationally.  Football, softball, golf, and baseball won regular season ACC championships, while football, softball, and golf—maybe Tech’s most consistently talented program—won their postseason titles.  Baseball was ranked in the top three for most of the year and has only missed an NCAA regional twice in over 20 years. The men’s and women’s basketball team both finished with 23 wins and both made the NCAA tournament, with the men’s team making it to the ACC championship final against Duke and upsetting a No. 7 seed in Oklahoma State during the first round of the National Tournament. Men’s and Women’s tennis both made it to the NCAA second round and both had an athlete ranked in the top five nationally, as Guillermo Gomez ranked fourth for the men and Irina Falconi ranked first nationally for the women. Add a NCAA tournament appearance for Volleyball, 10th and 11th overall finishes for the Cross Country team and top ten finishes for Swimming in the ACC tournament, and it would be hard to find a school outside of Florida in the mid 2000’s with a better run.

The point is this: Tech’s postseason woes are well-documented. Aside from Tennis in 2007, Basketball in 2004, and Football in 1991, most of Tech’s national championship appearances came way before any of us were born.  But that does not discount the almost guaranteed rate of success that Tech’s teams will have year in and year out. If you were to compare Tech with other schools of its academic caliber—say Duke, Vanderbilt, Northwestern, MIT, Cal Tech for the sake of this comparison—you would undoubtedly find Tech’s overall athletic program performs better top to bottom than any of the mentioned schools. Sure, those schools contain a strong national program in one or two areas, but they are far inferior looking at it from an athletic department perspective—So, as Matt urged two weeks ago, support these sports. These athletes are taking the same classes, enduring the same difficulties, eating the same food, and living in the same dorms as the rest of us; and yet they are still able to perform at a very high and successful level all year long.  The athletic department has put a lot of money into the athletic venues and Tech boasts some of the best facilities in the nation. O’Keefe Gymnasium is one of the loudest and best home volleyball venues in the nation.  Renovations to the Byers Tennis Complex make it one of the premier venues in all of Tennis, and not just in college.  Add to that the new McCamish Pavilion for basketball, the state of the art—and Olympic venue—Aquatic Center, and outstanding Shirley Mewborn softball field, and you’d be hard pressed to find a better array of settings for college athletics.

I realize I am biased, and I realize that there may be something out there better than what we have here. But that is okay. It doesn’t matter that I am biased. In reality, we all should be biased. We all should be proud of the facilities, the passion, the opportunity, and the excitement this school gives us, even if it is not always the best. Because in reality, it isn’t about who has the best; it just matters which one you care about the most.