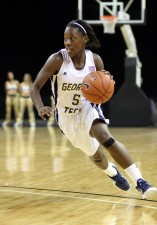 [/media-credit]Following a Jan. 18 loss to Duke, the Tech women’s basketball team continued conference play this week with a pair of games. The Jackets defeated Florida State on the road on Jan. 22 and Virginia at home on Jan. 25. The two wins improved the team’s record to 5-3 in conference play and 15-6 overall.

The Jackets first traveled to Florida State where they had not won in three straight tries. Tech used two first half runs to gain the lead at 45-28 at the half and coasted in the second half to win the game 79-55.

Offensively, sophomore guard Tyaunna Marshall led the Jackets in points with 22, requiring only 13 shots to do it. Senior center Sasha Goodlett also played a big role in the victory, and her 15 points were the second highest on the team.

However, the win was a total team effort with 11 different players scoring points for the Jackets.

The starters outscored the Seminoles’ starters 51-43, but Tech’s bench provided an even greater disparity, outscoring the Seminole’s reserves 28-12. The Jackets also distributed the ball well, with a 21:11 assist to turnover ratio.

The key to the game for the Jackets was their work on the defensive end. The Jackets applied pressure during different defensive sets all night to force 24 turnovers. The Jackets also capitalized on the turnovers with 32 second-chance points.

The Seminole guards felt the pressure when they crossed half court, and this made shooting a clean three-pointer almost impossible. Even though Florida State was down by a large margin, the team stopped shooting three-pointers due to Tech’s defense only allowing the Seminoles to shoot 10 percent from beyond the arc.

Following the win at Florida State, the Jackets returned home to Gwinett Arena to take on Virginia. Virginia came into the game with a nearly identical record as Tech, but left Gwinett with a 63-53 loss.

The game turned out to be sloppy with the team’s combining for 23 personal fouls, 31 turnovers and a 36 percent shooting percentage.

“I think the only thing on the stat sheet I’m disappointed with is our turnovers. For us to have 20 turnovers against a zone is not like us. That just tells you how good Virginia’s defense is,” said Head Coach MaChelle Joseph, courtesy of ramblinwreck.com.

The true difference in the game was that Tech was able to get to the free-throw line 15 times compared to Virginia’s six.

One of the Tech players who was perfect from the line was Goodlett, who also led the team in point and rebounds with 14 and 11, respectively.

Defensively, the Jackets were once again stalwart at the three-point line, allowing Virginia to make only one three-pointer in eight tries.

The Jackets also did a good job crashing the boards, out-rebounding the Cavaliers by 20. As great as Goodlett was going for the ball once it the rim, she was also stellar at blocking shots, totaling five in the game.

The game remained tight with the Jackets only up by four with eight minutes left. Marshall then found freshman guard Sydney Wallace beyond the three-point line. Wallace hit the shot and extended Tech’s lead to seven. Wallace then capped the 9-0 run with a layup at the four-minute mark, and Tech never looked back.

The Jackets’ next game is Jan. 29, in Clemson, S.C against the  Clemson Tigers. Tech will enter the game as heavy favorites. The Jackets average 72 points per game compared to the 57 points usually scored by the Tigers.