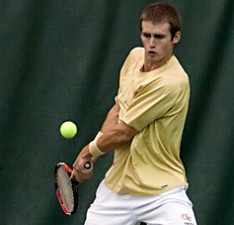 [/media-credit]After a two-month hiatus, the No. 15 ranked men’s tennis team kicked off their spring season at home on Jan. 20, with a matchup against the Monarchs of Old Dominion. Former Tech assistant Aljosa Piric, in his first year as the coach of ODU, returned to Tech to take on his former team. Tech then travelled up to Knoxville, Tenn., to face the Tennessee Volunteers to wrap up their non-conference weekend.

The Jackets slammed Old Dominion 7-0 in a short, lopsided team match, before falling to the Volunteers, 5-2; to split the matches for the weekend.

Senior Kevin King, the No. 9 ranked player in the country, and junior Juan Spir led the Jackets to a 7-0 sweep of the Monarchs to punch in a strong start to the season.

King, playing at the No. 1 singles spot, dismantled  Muzalewski in singles play for an easy 6-0, 6-0 win. Spir played at the No. 3 spot, also taking down his opponent Carlos Lopez-Villa in straight sets 6-2, 6-3.

At the No. 2 spot, Melian took his opponent Ochagavia to a tiebreaker in the first set. After winning the tiebreaker 7-3, Melian took control of the match, winning the second set 6-3 and won the overall victory to give the team a 4-0 lead over the Monarchs.

The rest of the Jackets would not have a problem to close out the day as Miljevic, Hundal and Segura also went on to take down their opponents in straight sets to secure the 7-0 sweep.

Despite the pure success of their opener, the Jackets did not have as much success in Knoxville against the No. 13 ranked Tennessee Volunteers on Sunday, Jan. 22.

King maintained his high level of play, winning his singles and doubles matches, but the rest of the team could not take down the Vols at home.

King and Spir, the second-best tandem in the country, played a tough doubles match against their opponents Mikelis Libietis and Hunter Reese, 8-7.

The win ensured that Tech was not swept in doubles plays on the day.

Segura was the only other Tech player to win his match, rallying to take down Taylor Patrick 1-6, 6-3, 7-6 despite dropping a lopsided first set.

Straight set Volunteer wins over Melian and Hundal at the No. 2 and 5 spots, respectively, were too much for the Jackets to overcome as they lost the remainder of their matches on the day. Edward Jones beat Hundal 7-6, 6-1 while Melian fell in a close 6-4, 7-6 match.

The loss dropped the Jackets to 1-1 on the season and gave Tennessee its second victory of the year.

Tech will return to the home court this Sunday, Jan. 29 to host the ITA Kick-Off Weekend against Auburn, Illinois and North Carolina at the Bill Moore Tennis Center.