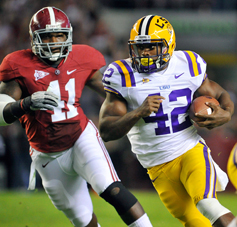 Well, we did it. We survived the football apocalypse relatively unscathed, unless you are an Alabama player or an overzealous drunk LSU fan who got into a fight. I am of course referring to the “game of the century” between No. 1 ranked LSU and No. 2 ranked Alabama that happened last weekend.

The game was given its dubious title before either team suited up, and analysts were hyping the contest even before the season started. Unfortunately, the SEC end-of-the-world battle was not the game of the century; it wasn’t even game of the week.

On paper, the Bama-LSU game seemed like a surefire classic. Each team had a full week off to study each other and to prepare for the game. The winner would more than likely go to the National Championship, and the loser would reserve a spot in the Sugar Bowl at the very least. The game also featured some of the best defenses of our generation, but there was too much defense.

Don’t get me wrong, I love defense, but what we all saw last Saturday resembled more of a soccer game than it did a football game. It was a performance that the LSU soccer team would be proud of: LSU won the game on three kicks that found the goal, while Alabama only made two of five.

Neither offense could find the endzone in over 60 minutes of action. Alabama could not set up one running lane for running back Trent Richardson that could have allowed him to score. LSU’s option running attack and short passes were completely ineffective, and quarterback Jordan Jefferson could not stomp around the edge for one big run.

The game’s only big play was a play that I do not believe was called correctly. Alabama Head Coach Nick Saban tried a trick play in the second half and had receiver Marquis Maze throw the ball. His pass was apparently picked off near the endzone even though replays neither confirmed nor deny the call. The outcome of that play resulted in points taken off the board for Alabama, and could have completely changed the outcome.

The one thing that video did confirm was that LSU is the best team in the country. The Tigers went into Tuscaloosa and beat the No. 2 team at its own game. However, the difference between the Tigers and the Tide is only a difference in kicker, and some think that Alabama should still be ranked second. I would have to agree with them, but Alabama should not play for the National Championship.

I said all week that the loser of the “game of the century” would still have just as good of a shot as anyone to reach the National Championship game. After seeing that Alabama is still third in the BCS standings, ahead of Stanford and Boise State, I stick to my previous statement.

It may seem counter-intuitive to say that the second-best team in the nation should not play for the championship but after watching that game on Saturday, I do not want to see a rematch of LSU-Alabama. Not because the game lacked offense, but because Alabama had its chance to reach the National Championship on Saturday against LSU and failed to capitalize. Plus, if LSU can go into Tuscaloosa and win, how does Bama expect to go into New Orleans and defeat the Tigers in front of thousands of wild fans?

Since college football does not have a playoff at the end of the season, a lot of fans say that each week of the regular season is a round of the playoffs. It is what makes college football so great because, unlike college basketball, every game matters. If you follow this logic, than there is no way that you should be in favor of putting Alabama in the championship game while Oklahoma St., Stanford and Boise St. are all undefeated.

Instead of watching the SEC snooze-fest on Saturday, I should have watched the 52-45 thriller between Oklahoma State and Kansas State. There were 12 more touchdowns in that game than there were at Alabama, and Oklahoma State proved that it is a legitimate team that can win big games. If the Cowboys can win their remaining games, including a win against No. 6 Oklahoma at the end of the season, then they should play for the National Championship instead of a one-loss Alabama team.

I don’t actually think that Oklahoma State or any other team could hold their own against LSU, but we have already seen what a game between Alabama and the Tigers would be: boring.