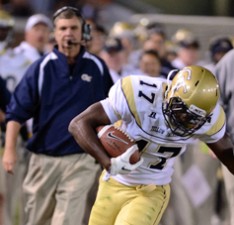 I hope you enjoyed Homecoming week as much as I did, and after a few weeks of not discussing the football team, Saturday’s performance needs to be put into perspective.

Last Friday, I interviewed Head Coach Paul Johnson in the Student Center Theater for the Technique’s first-ever “Ramblin’ With.” I asked Johnson about what this year’s homecoming game means to him, and he said that the game against No. 5 ranked Clemson would be one of the biggest games in his tenure at Tech. He was quick to hype the game and touted Clemson’s ability.

After the game on Saturday, Johnson was asked in the press conference if the win against Clemson was the biggest of his Tech career. Johnson was quick to downplay his most recent résumé builder and replied with a simple “I don’t know.”

Without going too much into what this sudden difference in opinion means about the coach, I will echo Johnson’s Friday opinion with a slight variation. Tech’s win against Clemson was the biggest win in Johnson’s Tech career.

Saturday’s win was so great because of the way that Tech won. Down early, the team fought back, and took a commanding halftime lead. The Jackets did not find a way to lose the game, as they did so often in the Chan Gailey era, but kept their foot on the pedal. They forced turnovers, the defense swarmed the ball carriers and Tevin Washington looked like he did the first three games of the season. The team did all of those things against what was the best team in the ACC.

Clemson came into the game undefeated and while Virginia Tech in 2009 was ranked higher, the Clemson squad was the most complete team that Johnson has ever beaten at Tech. Clemson has playmakers all over the offensive side of the ball and a handful of future NFL players on defense. Clemson had freshman phenomenon Sammy Watkins at receiver, a hard to contain quarterback in Tajh Boyd and a great slot receiver in DeAndre Hopkins. Virginia Tech in 2009 was Tyrod Taylor and an above-average defense. The 2008 Florida State game was significant solely because it was the first win by Tech over Bobby Bowden, and not because of the Seminoles’ players.

The Clemson offense had not been stopped this season before it came to Atlanta. It rolled over defending national champion Auburn. It made a mockery of ACC-favorite Florida State. The Clemson offense made North Carolina’s defense look like a high school defense just a week prior. Yet somehow, the same Tech defense that allowed 272 rushing yards to lowly Virginia two weeks ago, managed to hold Clemson to 95 yards on the ground. A lot of credit has to be given to defensive tackle T.J. Barnes as well as the rest of the Tech defensive line, but the Tech defense just made more big plays than the explosive Clemson offense.

Saturday’s win was also important because it gave hope to the season again. After two losses in a row to average competition, doubters flocked around the program and questioned whether the team would win another game all season.

Washington and company silenced all doubters and gave this season meaning once again.

Anything can happen in the ACC, but had the Jackets lost their third conference game, they would have needed tons of help to reach the ACC title game. Miami’s loss on last Thursday night to Virginia cracked the door for Tech and Saturday’s victory left it wide open. Sure, Tech will have to win against Virginia Tech, but the Hokies got destroyed against Clemson earlier this season and barely beat Duke last weekend. Tech also need Virginia to lose, but the Cavaliers still have to play Florida State and Virginia Tech, who they have not beaten since 2003. In reality, the Virginia Tech game will once again decide who goes to the ACC title game, but Tech has to like its chances against one of the weakest Virginia Tech teams in recent years.

The win over Clemson was also significant because of what Tech did not have. There was no Jonathan Dwyer, Anthony Allen, Josh Nesbitt, Demaryius Thomas or Derrick Morgan in Saturday’s game. There is not a lot of NFL talent on Tech’s roster, or at least not NFL-ready talent. This team is a bunch of young players who came together and executed better than its opponent. It did not listen to the hype that surrounded Clemson’s quarterback or its bevy of long-haired receivers. They did not listen to the media who wrote them off after two sloppy games on the road. The team came out on Saturday and proved that the first six games of the season were no fluke; this team is good.

Tech’s win over Clemson might have been the biggest game of Johnson’s career, but do not expect him to celebrate. I am sure he is already hyping Virginia Tech, while also giving no thought as to what a win over the Hokies might mean to him. All Johnson seems to care about is winning, and if that mindset produces performances like Saturday’s, then that is okay with me.