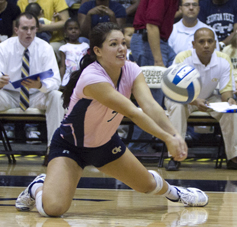 After two games on the road in Fla. against Miami and Florida State from Oct. 14-16, the Jackets’ volleyball team finished their five-game road stretch from Oct. 21-26 with matches against Virginia Tech, Virginia and Middle Tennessee State.

The Jackets split two conference matches between Virginia Tech and Virginia before travelling to Murfreesboro, Tenn. and dropping their last non-conference matchup of the season against the Blue Raiders.

In the first set against Virginia Tech, Georgia Tech scraped by with a 25-23 victory on seven kills by junior rightside hitter Monique Mead.

The second set went to Virginia Tech despite the Jackets being within reach for the majority of the set. The Hokies led 22-19 before the Jackets scored on Mead’s sixth kill of the set to bring the score to 22-20. Virginia Tech then rattled off three straight points to take the set and even the match score at 1-1.

The third set went to Virginia Tech in a 25-17 decision before the Jackets responded and brought momentum to their side. The fourth set easily went to the Jackets in a 25-11 victory in which Virginia Tech committed four errors and allowed the match to be tied at 2-2. The fifth set remained close, with the Hokies leading 9-8 before hitting six consecutive points to take the final set 15-8.

Mead finished the night with 24 kills and 15 digs, her seventh double-double of the season. Sophomore setter Kaleigh Colson aided the effort with 41 assists along with her seven kills and five blocks.

The first set went to the Jackets on four kills by sophomore outside hitter Jennifer Percy and 12 assists by Colson. The Jackets then followed up with a 25-20 second set win with six kills from Mead and kills from three other teammates. The Jackets then stumbled in the third set, with the Cavaliers taking a 25-19 victory and bringing the match score to 2-1. The loss would not affect the Jackets, however, as Tech won the fourth set and the match with a solid 25-17 win led by six more kills from Mead.

After the win against the Cavaliers, the Jackets travelled to Murfreesboro, Tenn. to face the Blue Raiders of Middle Tennessee State in their only midweek match of the season. The Jackets stumbled despite winning the first set and MTSU earned the 17-25, 25-18, 25-15, 25-22 win.

The Jackets began the first set quickly with seven blocks and five players netting at least two kills in the 25-17 set win. The Blue Raiders responded quickly in the second set, holding a 16-15 lead over the Jackets before winning nine of the last 12 points to even the match. MTSU continued their success in the third set, easily taking the 25-15 victory.

The final set of the match saw a back-and-forth exchange as the Jackets continued to rally from being down against the Blue Raiders. Tech could not make the comeback from down 24-20, eventually falling 25-22 and losing the match 3-1.

The Jackets return home on Oct. 28 to face Wake Forest during Homecoming weekend.