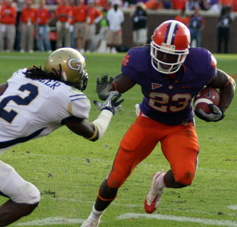 The No. 5 Clemson Tigers are 8-0 and bring their highest-ranked squad since 1959 to Bobby Dodd Stadium to face off against the Jackets on Oct. 29. The Tigers are coming off of an explosive 59-38 performance against UNC in which they scored 35 points in the third quarter. The Tigers face off against the Jackets as favorites on the road in a primetime game that will be broadcast nationwide. In order for the Tigers to continue their success and remain undefeated, they will have to do the following.

First, the Tigers will have to maintain balance on offense and spread the ball around evenly. Quarterback Tahj Boyd is completing 61.9 percent of his passes with 24 touchdowns and only three interceptions. Boyd has a balanced wide receiving corps with seven receivers averaging over 13 yards per reception. The receivers are led by true freshman Sammy Watkins, who has 819 yards and is leading the ACC in receptions with 54. If the Tigers can spread the ball to other receivers such as DeAndre Hopkins and Dwayne Allen, Tech defenders will have to evenly allocate their pass coverage and Watkins could possibly be more open for big plays.

Secondly, the Tigers will have to establish a strong run game. Running back Andre Ellington has had a productive season with 745 yards and seven touchdowns on 146 carries. Ellington has been nursing a nagging injury, but if he can produce some strong runs, the Tigers will have an advantage over the Jackets. Tech has allowed four 100-yard rushers this season and Ellington was productive in the previous matchup in 2010 with 166 yards and two touchdowns on 20 carries. If he has another big day against the Jackets, he will be able to control the clock and keep the Jackets’ offense off the field.

Finally, the Clemson defense will have to step up and force the redshirt junior quarterback Tevin Washington to run the ball. The Tigers have struggled at times on defense, but if they can stick to their assignments, they could force the Jackets to be one dimensional and make Washington to have to make plays with his feet. If the Tigers can force third and long situations, the Jackets will be forced to throw the ball, an area of the game they have struggled with during conference play.

The Jackets are coming off of a two-game road stretch in which the Jackets went 0-2. Tech was held to its lowest points and yardage totals of the 2011 season last week against the Miami Hurricanes. Despite their recent shortcomings, the Jackets still remain among the nation’s leaders in points per game and rushing yards per game.  If the Jackets want to get back to winning form and remain undefeated at home, they will have to do the following.

First, the Jackets will have to expose one-on-one matchups. If the Jackets can correctly execute their option plays and put their specialty players in space on the field, the defense will be forced to make a play in the form of an open-field tackle. If all of the correct blocks are hit against the Clemson defenders, there will be less pressure on Washington to have to make a big play on every down. If Washington can hit a big run or two, the Tigers will have to put more emphasis on stopping the quarterback run and the perimeter game will open up.

Secondly, Tech will have to effectively cover Clemson’s receivers in one-on-one matchups. Sophomore cornerback Louis Young and junior cornerback Rod Sweeting will be facing off against Clemson’s Watkins and Hopkins. If the Jackets put too much emphasis on covering a specific receiver like UNC tried against the Tigers, another one will be wide open and Clemson will take advantage. If Sweeting and Young can limit the big plays by the receivers, the Jackets should be able to keep the game within striking distance.

Finally, the Jackets will have to sustain drives with strong play on first and second down. In the two recent road contests against Virginia and Miami, the Jackets often found themselves in third-and-long situations that forced them to predictably throw the ball. Head Coach Paul Johnson will have to find some individual matchups during the game that the Jackets can exploit on first and second down in order to prevent throwing situations If Tech can create manageable third down scenarios, they will be able to stick to their option game.