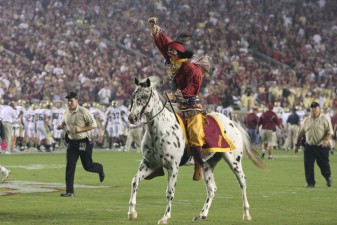 Welcome back to another installment of Time Out. I have thoroughly enjoyed the college football season thus far and nothing has made me happier than watching Georgia open up the season 0-2.

This week I am going to take a step back from the field and talk about an issue that is on the forefront of fans’ minds. I am sure that a lot of you have been following the recent drama with Texas A&M and the Aggies’ eventual move to the SEC and rather than bore you with the details of all the recent ESPN reports, I want to formally declare that conference expansion is ruining college football.

My biggest gripe with conference expansion is the detrimental effect that it has on the traditions of college football. College football is built on traditions and rivalries: Michigan versus Ohio State, Alabama versus Auburn. Everybody loves a good rivalry because everybody knows that anything can happen in a rivalry game. It does not matter how good one team is—its rival will always stand a chance to win.

Unfortunately, one or more of the great rivalries may never happen again if the conferences realign. Take Texas versus Texas A&M for instance. Should the Aggies move to the SEC, they would no longer want to play Texas every year on top of LSU, Alabama and Arkansas. Fans look forward to the rivalry game all year, so removing it from the schedule could affect fan morale for those teams and take away from the excitement of college football.

Another way that conference expansion could ruin college football is the outrageous scenarios that could arise in the bowl games. If conference expansion runs rampant and four 16-team “super conferences” are formed, then we could have postseason situations that are worse than they are today. Teams in these super conferences will be hard-pressed to go undefeated and in all likelihood, there would be four or five 10-2 teams at the end of the season. What would the BCS do with these teams who all ended up with identical records with almost identical conferences? They would do what they have always done: just use some incoherent computer formula to determine who will go to the National Championship Game. If the voters and computers cannot figure out which team is best now, then there is no way they will be able to figure out which two teams are the best when all the teams are in super conferences.

Oh, and do not kid yourself in thinking that four super conferences could lead to a playoff because the BCS is under contract until 2014 and the bowl games make far too much money. The heads of college institutions will also say that a playoff would never happen because it would force students to miss too much class time. Like they really care about that…

Another problem that conference expansion poses to bowl games is the predetermined bowl game tie-ins. These tie-ins decree that the ACC Champion goes to the Orange Bowl and that the Big 12 Champion will go to the Fiesta Bowl. With the inevitability of super conferences, the big wigs behind these bowl games will have to find a new tie-in should the ACC or Big 12 get destroyed. What is most egregious to me is that the Rose Bowl, the granddaddy of them all, might get two teams that are neither from the Pac-12 Conference nor the Big Ten Conference. I shudder to think about the possibility of Texas Tech playing Rutgers in the biggest bowl game of the season.

The next problem I have with conference expansion is that it would widen the gap between David and Goliath. Should four 16-team super conferences form in the near future, it would widen the already cavernous gap between the haves and the have-nots. Normally, I am not entirely democratic but when it comes to college football, I want to see every team get an equal opportunity to win the championship. Boise St. and TCU have done their parts the past few seasons to bust the BCS, but neither will get a chance again if they are left out of the super conferences. They will be playing even more cupcakes because no super conference team will want to play them along with the teams in its conference. TCU and Boise will not be able to get enough BCS points and well, you get the idea.

Also, everyone is talking about the possibility of Texas and Oklahoma leaving the Big 12. That would be exciting for fans of those teams, but what about Baylor, Iowa State and Kansas State? Will those schools be forced to play in Conference USA, or what is left of it? No one knows the answer yet, but that great performance two weeks ago by Baylor’s Robert Griffin might be one of the last Baylor games ever televised.

While some fans are excited about the possibilities of conference expansion, it is important to think about issues like these and truly consider whether a super conference system would be good for the game.