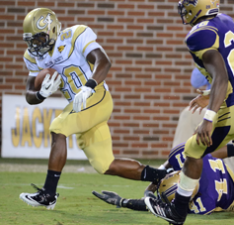 Middle Tennessee State kicked off their season on the road with a loss against Purdue on the road despite leading the majority of the game. MTSU took a lead into the fourth quarter and outgained the Purdue Boilermakers with 111 more passing yards and 40 more total yards. Middle Tennessee State missed two field goal attempts during the game and the mistakes added up to a loss. If the Blue Raiders want to see their first win of the season, they will have to accomplish three things along with limiting their mistakes.

First, the Blue Raiders will have to have a productive and accurate passing game if they want the game in their favor. Sophomore quarterback Logan Kilgore played well in the Purdue game, completing 27 passes of 45 attempts for 330 yards and two TDs. But Kilgore will have to be aware of the Jacket defense to prevent any interceptions which Tech can and will take advantage of. Also, Kilgore will have to be vigilant in the pocket unless he wants to see the same results as Western Carolina’s Brandon Pechloff — multiple sacks and low pass production. Kilgore will need to continue to find multiple receivers if the Blue Raiders want to see the endzone.

The second task lies within the Blue Raiders’ defense. MTSU will have to be able to cover the various weapons of the Jackets’ potent offense. They will have to hold off Tech’s option offense, which can grind the clock down and win the time of possession battle or open a big play and score quickly. The Blue Raiders have one of the youngest secondaries in the nation, and will have to play one-on-one coverage against a Tech receiving corps that had 365 total yards against Western Carolina in week one. If MTSU can limit the running game, they can force the Jackets into long third down passing situations.

Finally, the Blue Raiders will have to generate a more efficient running game. Against Purdue, MTSU rushed for 130 yards, half the amount Tech rushed for against Western Carolina. The Raiders had 1 rushing TD versus the Jackets’ 6 TDs. If Tech is able to contain Kilgore, and if MTSU’s rushing game does not have a great performance, then it could be a bad night for the Blue Raiders at their own stadium.

The Jackets are headed to their first road game of the season against Middle Tennessee State. Last year when the two teams met, Tech dominated in the third quarter to achieve a 42-14 win. The Jackets are 1-0 in the all-time series versus the Blue Raiders. But with an electric energy rolling over from the 63-21 victory over Western Carolina, the Jackets are favored over the Blue Raiders. In order to secure a win, Tech will have to achieve three things: maintaining and building upon the defense, opening up the passing game, and controlling the clock with the running game.

The Tech defense will have to show up against Kilgore and the pass-heavy Blue Raiders. The Jackets will have to put pressure on the sophomore and cause more mistakes, like the lone interception Kilgore had against Purdue. The Jackets’ secondary needs to cover MTSU’s receivers carefully in order to prevent another 300+ yards passing day by Kilgore. In the Purdue game, the Blue Raiders had nine players with receptions, with seven gaining over 15 yards.

Second, Tech will have to maintain high production in the pocket. In last week’s win over the Catamounts, junior quarterback Tevin Washington completed eight of 13 passes for 271 yards and three TDs. Sophomore quarterback Synjyn Days was three of three passes for 94 yards as well. Helping to rack up strong offensive numbers, both Washington and Days will have to bring the same intensity they brought against WCU to conduct Tech’s offense. The offensive line will also have to protect well in order to avoid any sacks or tackles for loss.

Ultimately, Jacket receivers and backs will need to continue to be dynamic, as seven different Jackets scored last week. The Jackets will have to continue to open up big plays against a persistent Blue Raider defense that held Purdue to 27 points. Junior wide receiver Stephen Hill and senior wide receiver Tyler Melton will have to continue to be deep threats in the passing game. Tech’s rushing offense, ranked eighth in the country, will have to get by MTSU’s young and strong defensive line, who accounted for three sacks and eight tackles for loss against Purdue. Junior A-back Orwin Smith and the other A-backs will need to use their speed to get into the secondary and create long yardage opportunities.