On Wednesday, Oct. 14, the suspension (held in abeyance) verdict of an Office of Student Integrity (OSI) investigation into the Georgia Delta chapter of Phi Delta Theta (PDT) Fraternity was made public. The investigation came in response to two separate instances of student complaint regarding discriminatory conduct from the Fraternity.

As per PDT’s request, the Fraternity’s hearing was undertaken by the Undergraduate Judiciary Cabinet (UJC).  In its post-hearing report to Peter Paquette, the director of OSI and assistant dean of students, the Chief Justice of UJC stated that, due to a “preponderance of evidence,” both the events of July 2 as well as those of August 11 alleged by complainants and witnesses did indeed occur. Additionally, UJC found that “ … it is evident that these acts were undertaken by individuals under their own will, who have failed to come forth in light of these events.”

Previously, PDT had authored and sent a letter to John Stein, dean of students and vice president of Student Life, on Sept. 28 to appeal the verdict. In response to being notified of their suspension, and having their appeal denied, PDT released the letter to news outlets for publication.

“We don’t believe we received the same fair treatment offered to the person who made the complaint against our Fraternity,” said Daniel Goldman, president of the Georgia Delta chapter of PDT. “Leaders of Georgia Tech met several times with [the accuser], plus they interviewed witnesses suggested [by] those who accused us.”

According to Goldman, PDT was not presented with any explanation for the suspension verdict by OSI or Tech, before or after its appeal process.

Specifically, PDT disagreed with the process carried out by Paquette, arguing that his interviewing of multiple accusers demonstrated a predetermination of guilt. According to the letter, Paquette refused to meet with PDT’s witnesses or review any of the evidence submitted to him by the fraternity. “We offered Mr. Paquette the opportunity to come to the House, see the room where the comments supposedly were made, interview anyone he wanted to speak with and conduct any other action he thought were necessary,” Goldman said. “He refused to do so.”

Paquette noted that the processes of “gathering information” and “investigating” would be necessarily differentiated. “As it relates to this matter, I gathered the information regarding the complaint to determine if there was sufficient cause to move forward with the process, but the hearing itself serves as the primary investigative mechanism/vehicle whereby the accused party has a chance to share their full account of what occurred,” Paquette said. “In this matter, the UJC was the investigator/adjudicator and made the decision to find the chapter responsible for violating the
Code of Conduct.”

According to Paquette, the UJC hearing would have been the opportunity for the Fraternity to present all information and evidence at a whole. He addressed  being quoted in PDT’s letter as saying, “I will not need additional information” explaining that at the time of the email, the Chapter had not decided whether they wished the case to be decided by Paquette or UJC, making it premature at that time to provide evidence.

Paquette’s findings were considered, however, after the testimonies of two of the informants regarding the alleged Jul. 2 incident were thrown out due to having been discovered communicating with one another during the their respective testimonies to UJC.

Another of PDT’s major complaints revolved around what its members felt was a failure by OSI and UJC to properly consider its evidence. In the hearing, the Fraternity submitted a combined total of 23 witness statements for both incidents. Phone screenshots and receipts demonstrated, according to PDT, that residents of the rooms indicated by the complainant in the alleged Aug. 11 incident were not present in the house at the time of the alleged events, and the doors to their rooms were locked. However, during the UJC hearing, members of the Cabinet were informed that brothers of PDT knew that the Fraternity House Manager had lost a master key prior to the alleged Aug. 11 incident. This key could have been used by other fraternity members to enter the room.

PDT’s letter also stated that the complainant for the Aug. 11 incident made contradictory statements over the course of time. Inconsistencies included her descriptions of when the racial slurs were yelled at her in her police report versus her tweet about the incident. Despite this, UJC found her testimony presented at the hearing to be congruous with the account of events she provided for the police report. Therefore, she was found to be a “credible source” by UJC.

Paquette also addressed PDT’s claims that pressure was applied to UJC to produce a particular ruling. PDT’s letter stated that an Anil Shetty, coordinator of OSI, was present at the hearing to provide a reminder to the Cabinet that the students’ views would be known by OSI.

“Anil Shetty, who advises UJC, was present for the hearing,” Paquette said. “This is standard practice for all UJC hearings.”

PDT also made mention that the time the Fraternity was notified of hearing was not five business days in advance, as required by the Code of Conduct.

Paquette disputed this, saying “The chapter was notified via e-mail in advance of the potential date of the hearing [within the proper timeline], and they agreed to that date.”

Paquette added that the Chapter had been on probation during the 2014-2015 academic year due to Code of Conduct violations. He stated that an organization’s past misconduct can influence sanctions in the future.

“I believe in a justice system based on due process,” said Rob Montgomery, a third-year ME. Montgomery is taking steps to found a Foundation for Individual Rights in Education (FIRE) chapter at Tech. Following the claims by PDT that OSI’s investigation was one-sided, Montgomery feels there is a need for awareness of free-speech rights at Tech.  FIRE is a nonpartisan, nonprofit educational foundation with the stated purpose of preserving civil liberties in higher education. FIRE, however, does not sponsor student-led campus chapters.

Correction: October 24, 2015
A previous version of this story implied that FIRE provided sponsorship for student-led chapters on college campuses, but this is not the case. 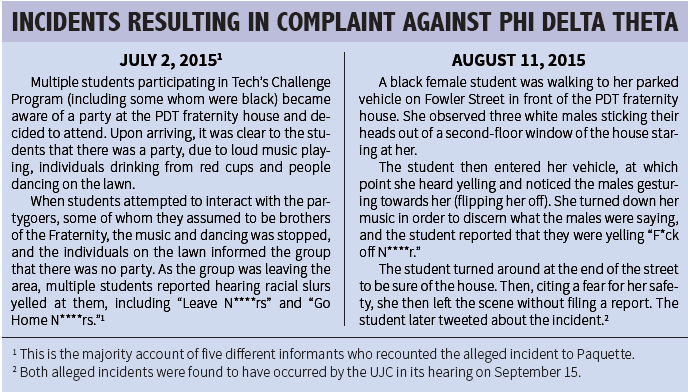