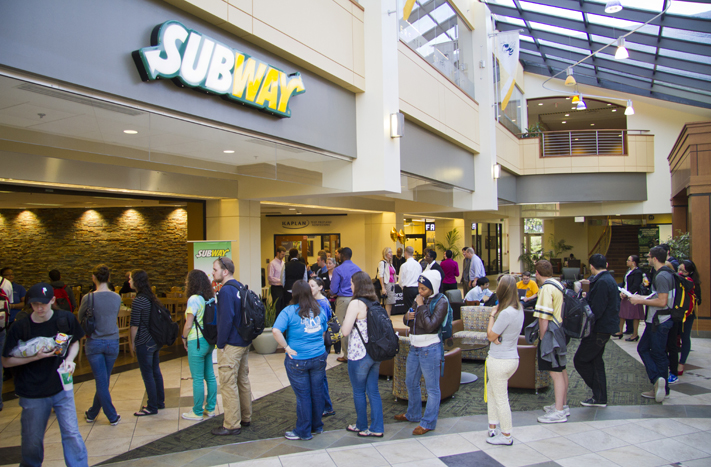 Despite many delays, the Subway in the Student Center—which now features two service lines—is open and experiencing a brisk business. The new location replaces Einstein’s Bagels after moving from its former location next to Chick-fil-A.

Subway’s expected opening date had been continually pushed back since its anticipated opening date in August, which aligned with the beginning of the fall semester. However, design hold ups appeared early in the process to create significant delays.

“We originally asked for [the] drawings to be completed by early May – they were not completed until early July due to the volume of work at their headquarters.  Our efforts to complete the design for the entire space…bid the work through a contractor and construct led to opening in mid-October,” said Rich Steele, Senior Director of Auxiliary Services.

There was also a one week delay towards the end of construction due to difficulty scheduling the final Health Department inspection, as a result of workforce reductions in that office. Subway officially opened on October 10.

Despite the late start, Subway’s first day of business did almost double their normal level, according to Steele, and has continued to be a popular lunch and dinner destination for students. Part of the reason is the installation of two sandwich lines instead of just one. Double lined Subways are a more popular structure on college campuses than single lined locations, helping to alleviate efficiency issues.

“We tried single lined subway, and we just didn’t realize how popular it was going to be. The only solution was to do a double line, and [Einstein’s] was the only location where we could do it,” Steele said.

Subway’s double lines, while already helping to improve customer service, will only be effective long term if running at peak efficiency.

The success has caused administration at the Student Center to begin to consider tweaking Subway’s hours of operation and menu.

“We’ve had a couple people come by a little before we open at 10:30, so maybe we need to open a little earlier,” Steele said. “We have the capacity [for a breakfast menu], but it’s currently something we’re not offering. If students want that product, than we’re happy to serve them.”

“It’s really nice to have a better and larger opportunity for healthy food at lunch”, said Kara Evitt, a second-year CE major.

The reason for Subway’s move results primarily from the need to increase the restaurant’s serving capacity. Subway’s original location frequently struggled with long lines and significant wait times for students.