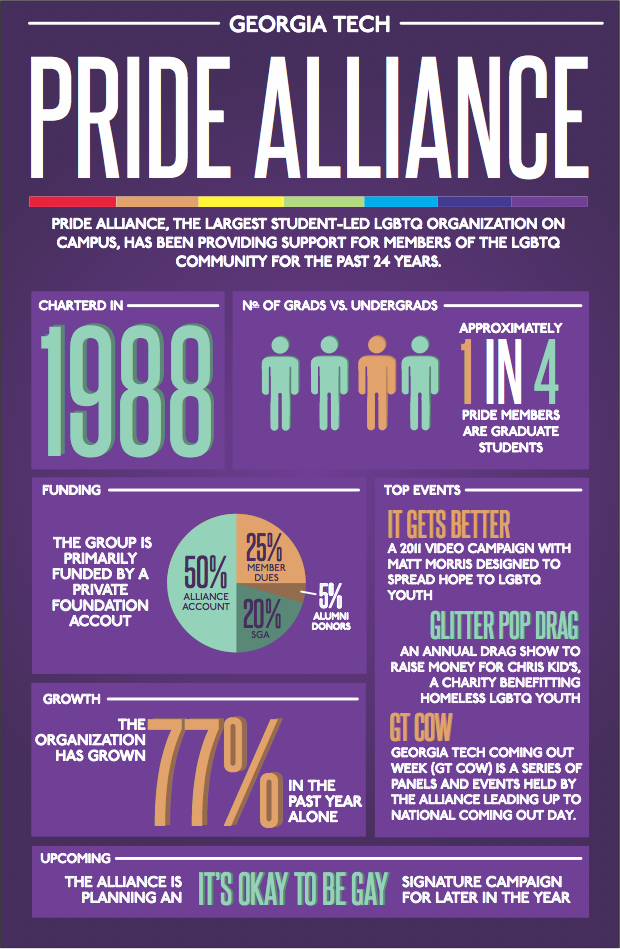 On Thursday, Oct. 11, the Ferst Room on the top floor of the library saw over a hundred individuals congregated to meet-and-greet with each other at the Institute’s second annual Lesbian-Gay-Bisexual-Transsexual-Queer (LGBTQ) reception.

“The purpose of the event is to show support to the LGBTQ community and on behalf of our institution with the institution diversity, we support their initiatives,” said event coordinator Najah Hofman.

However, the Institute of Diversity, which hosted this event, has begun to look at other initiatives to better aid the growing LGBTQ community on campus.

“What is the way forward for Georgia Tech to make a commitment to address the LGBTQ communities that are within our source of ability to do so. As the diversity office, this is something we should be looking at and thinking about,” said Vice President of Institute Diversity Archie Ervin.

“I think that [Tech] has been a fairly welcoming environment for me as a student,” Bruce said. “I know that I’ve always felt supported as a student here and definitely the fact that there is a student organization that has a presence on campus has made a difference on my self-esteem my ability to accept myself here.”

Bruce went on to discuss the ways in which the administration could improve its reception towards the LGBTQ community.

“One thing that the student group would love to see get off the ground is an office for LGBTQ issues,” Bruce said. “I know that UGA has one and a lot of our competitive institutes have them – sort of like the women’s resource center.”

Peer institutions like UGA and MIT, in addition to having student groups for the LGBTQ community, house these resource centers, which showcase the administration’s more tangible way of supporting the LGBTQ student body.

The women’s resource center at UGA, established in 2005, serves not only as a designated “safe space” for individuals, but, with the inclusion of a social lounge and a library containing over 1000 pieces of literature among other resources, also as a place for community and support for the LGBTQ population.

Similarly, MIT, which was awarded the title “Most Gay-Friendly School” by Newsweek, began its women’s resource center in 2002. In addition to having a “Rainbow Lounge” and extensive resources, the resource center undertakes various initiatives throughout the year, such as a campaign where faculty and staff post a “You Are Welcome Here” sign and pledge to support the LGBTQ community.

“In fact, Vice President Ervin and I just had a conversation, the first of several conversations, about creating an LGBTQ resource center that would support students and staff,” Peterson said. “It probably wouldn’t start with a [physical] office initially, but we’re [trying] to establish that resource center sometime this year.”

Ervin, however, noted that the implementation of this by the end of the year may be difficult to achieve.

“I think we have to propose some options, and it could be all of the above. The more difficult challenges will be around the resources – the more specific you get in terms of space and those kinds of things,” Ervin said. “This is a tight time – it’s a challenge, money is a challenge. That’s a hurdle I would have loved to not have to go over – but that’s something we all have to deal with whenever creating something new.”

Bruce, in regards to the difficulty of obtaining funding, acknowledged this.

“It certainly is an issue about allocating funds – but the institute will have to decide that the LGBTQ issues are important enough to merit an office,” Bruce said.

Ervin, in compliance with the President’s desires to begin this support for the community, has assembled a team of colleagues to draft multiple options that will be ready to submit to the President’s office by the end of the fall semester.

“The institution will have to make commitments – that’s how decisions are made. You look at your allocation abilities, what you can do, and that’s how you determine what you can sustain,” Ervin said. “I think it’s important that we try and address this in a way that’s commensurate with Georgia Tech’s abilities.”

According to Peterson, the ultimate goal of whatever measure the institution takes is universal regardless of its path.

“There [should be] a contact point that serves as a central focus for the pride alliance on campus, the affinity group and the alumni association…to serve as an outreach and, well, a resource center,” he said.