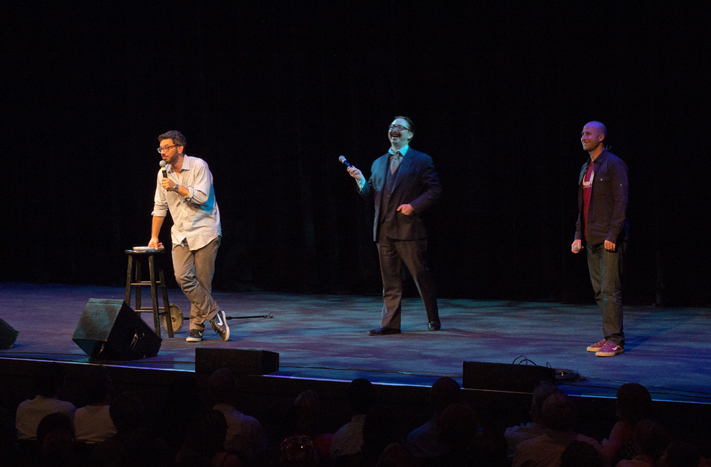 [/media-credit]Co-executive producer Adam Lowitt, along with correspondents John Hodgman and Al Madrigal, came to the Ferst Center, promising a night of stand-up, a question-and-answer session and a chance for The Daily Show fans to get a closer look at the minds behind the show.

The evening consisted of each member of the Daily Show crew performing a half-hour comedy routine, and then a question-and-answer session, where the entire audience was encouraged to participate.

Questions by the audience covered topics ranging from politics to comedy. One of the questions came from Tendal Mann, a 14 year-old fan.

“I’ve been watching [The Daily Show] since I was born, basically,” Mann said. “It’s funny, actually, when my brother was born, while my mom was in labor, I asked her if we were going to miss The Daily Show.”

After a brief exchange between Lowitt, who started as a stand-up comedian himself before doing an internship at The Daily Show and working his way up, and Mann, Lowitt proceeded to explain the amount of life experience and thinking ability that goes into being a comic.

“I think that [working at the show] and [doing stand-up] are two separate things, but I don’t think they’re mutually exclusive. I think the idea that you can find absurdity in things that you observe outside is great,” Lowitt said.

The Daily Show, a satire strongly emphasizing the absurdity in politics, has been on the air since 1996, and still enjoys high ratings. Lowitt who has worked with the program since 2002, believes that comedy is often a better way to present an issue than serious discussion.

“You know, when I was in college, you had all of these people in the union who were shouting about things, and they were sort of a laughing stock,” Lowitt said. “No one really listens to what they are saying. With comedy, people are much more receptive, because it’s not as jarring, and they’re willing to listen to your point. I feel like it’s much more advantageous to have a dialogue that way.”

Nevertheless, Lowitt mentioned that the primary purpose of The Daily Show is not to inform, offering more personal information about the show.

“I would just say our purpose is to entertain. We try to have the funniest, smartest show we can, and anything else people acquire from viewing is a bonus for them,” Lowitt said.