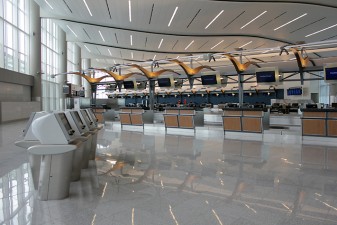 “It’ll be a tough lesson for people to learn,” said Al Snedeker, Public Relations Manager for the airport. “If you want to take MARTA, you’ll have to build in a little more time.”

To direct travellers to their correct destination, the airport and airlines have launched a public awareness campaign and will be placing new road signs on the way to the airport.

Only those who are connecting to another city in the U.S. will need to recheck their bags. The airport hopes that the new terminal, designed by Atlanta Gateway Designers and constructed by the firm Holder, Manhattan, C.D. Moody, Hunt, will attract new traffic to the city. According to Snedeker, the terminal is meant to evoke a “sense of place.”

“It’s about engaging passengers and making it an enjoyable experience…so they’ll ultimately choose to come through Atlanta,” Snedeker said, referring to the atmosphere of the terminal.