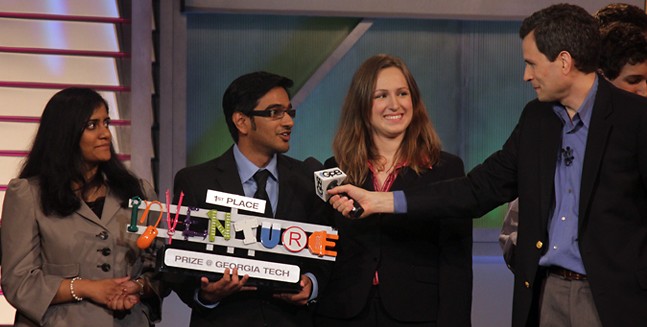 Students, faculty and community flocked to the Ferst Center on Tuesday, March 13, for the 2012 InVenture Prize. In the competition, Tech undergraduate students submitted their own inventions, in the hopes of winning the grand prize of fifteen thousand dollars, the free services of a patent attorney, and acceptance to Flashpoint, Tech’s startup accelerator program.

Sponsored by Georgia Public Broadcasting and hosted by New York Times columnist David Pogue and Tech professor Dr. Bahared Azizi, the competition was streamed live on the GBP site, allowing for unlimited audience access. The show featured the six finalists, who were chosen from over 500 students, and then went on to make it through two more rounds of cuts.

However, the InVenture Prize has goals other than handing out a $15,000 grand prize as well as a $10,000 second place prize. Gaining community attention, especially from a younger audience has been emphasized. This year’s competition had both a high school group as well as two elementary schools in its audience.

“The importance of engineering…has been lost on younger generations”, said Vice Provost Ray Vito, “[The Inventure Prize] helps young people understand that engineering is actually a lot of fun and can be very useful in a lot of ways”

Vito believes that the competition has stimulated entrepreneurial activity.

“Before the InVenture Prize, I did not know of many students with patents. Now, there are a number of students who have obtained patents”, Vito said. Students who have just been accepted to Tech are also encouraged to come to the competition.

“One thing I’ve realized in life is that you get what you celebrate…and [the Inventure Prize] is an opportunity for us to recognize undergraduates and celebrate their achievements,” Vito said.

The competition also hosted a panel of judges containing several businesspeople. Paul Ollinger, a regional VP of Sales at Facebook, was one of Facebook’s original 250 employees. Deborah Kilpatrick is a Tech alumna and Senior VP at Cardio DX, a genomic medicine company. David Phelps is the President and CEO of CreoSalus, one of the world’s most comprehensive peptide science company.

“We believe that Re-Hand will allow people to gain back the independence that they once had.” said Vincent. “That’s why we are so excited about winning Inventure. Now that we have our first investment and a patent, we are headed in the right direction to make Re-Hand a reality.”

“We plan to move forward with Re-Hand and try and get it to market and in the hands of patients,” Kibria said. “Some of our group members will be attending Flashpoint, Tech’s startup acceleration program, while the others will be reaching out to industry representatives and venture capitalists in order to get funding for Re-Hand,”

The team took part in the competition in order to help patients and to learn how to develop a product and eventually bring it to market.

“There are 30 million people in the US alone who suffer from weakened hand conditions,” LeMar said. “These people are our motivation to continue forward with Re-Hand’s production to provide them with a fun and interactive method of hand rehabilitation.”

“The biggest benefit of entering this competition isn’t the possibility of winning the money or the patent. It is the opportunity…to learn from faculty who are established in industry and are dedicated to helping you succeed,” LeMar said.