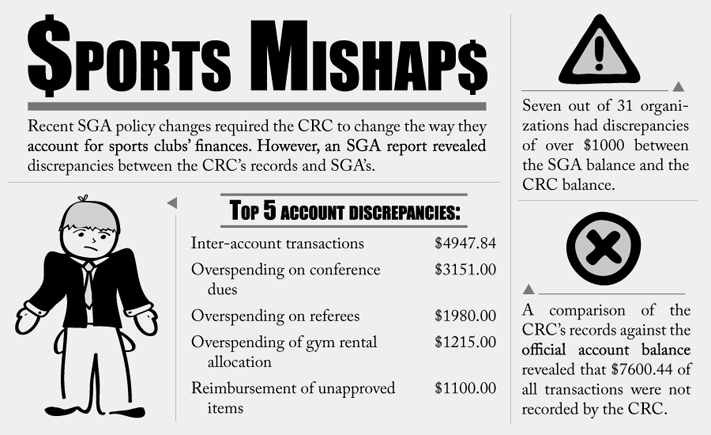 The SGA Joint Committee on Fiscal Responsibility (JCFR) released a report auditing the Tier III sports clubs accounts maintained by the CRC, stating that “the CRC is not following consistent and quality accounting procedures” with a $7600 discrepancy between the records of SGA and the CRC.

The report went on to say that the CRC is in violation of SGA’s Joint Finance Committee’s policies, namely reimbursing more than was approved at the time, spreading expenses across multiple line items of a bill and approving travel allocations for less than 150 miles.

“I feel that there’s nothing more that we could have done, more or less,” said Matthew Vickers, undergraduate member of JCFR. “I think the report speaks for itself and the results speak for themselves. This report is a snapshot of what was going on. It doesn’t tell the full story, but it is a snapshot, as of Feb. 15.”

Previously, the sports clubs accounts were under one major account which the CRC had access to, but changes to SGA policy have created a different account for each sport and emphasized adherence to line-itemization.

“SGA was a lot more lenient back then, and it was a lot better for us, because we have a lot of variability in our budget,” said Taylor Medford, President of the Ice Hockey team. “That’s one of the things I have not liked about the new line item policy, because from our side we have such high variable costs.”

The CRC was required to create spreadsheets which would track the different clubs’ finances separately, as the result of an executive order made by the SGA Presidents last semester. The order was made to address concerns with the transparency of the CRC’s accounting.

“It was really difficult to go back through ledgers in system to verify that money is being spent in line with how it’s being allocated,” said James Black, Graduate Student Body President. “The purpose of the executive order was to establish a simple reporting spreadsheet for all of the accounts that lie outside of Student Organizations Financial Office.”

CRC staff responsible for maintaining the CRC spreadsheets admitted to internal errors that caused the discrepancies.

“There are errors on our part in updating the spreadsheet involving budget update and data upload entry errors into the spreadsheet,” said Dan Hazlett, Assistant Director of Campus Recreation for Intramurals and Sports Clubs.

The CRC said that these flaws were “human errors” made while updating the CRC spreadsheets to the required SGA standardized spreadsheets after the policy change.

“We were trying to play catch-up with the spreadsheets that we were already using,” said Ken Lovic, Sports Club Coordinator. “There were errors made entering data. Not illegal entries, just poor entries on our part.”

The CRC used this reasoning to justify some of the differences between their spreadsheet balance and the SGA ledger balance, which is the actual checking account containing funds for each sports club.

“The check [for an expense] was written to the right club, but a simple account entry number in the spreadsheet was typed incorrectly,” Lovic said. “On the ledger, you see that it was made out to the right club but out of the wrong account. A simple ledger adjustment corrects that.”

Another source of error was in rounding amounts between SGA and the CRC.

As a result of the previous errors, the CRC staff has planned to implement changes to improve the accuracy of their accounting procedures by having increased individual management and checking of accounts and transactions.

JCFR based its report on the data provided to them by the CRC, but it did not consult with the CRC  after receiving the data.

“We just wanted to go by the numbers and take a snapshot in time — so this is a conversation starter,” said Michael Ellis, graduate member of JCFR. “We wanted to do our homework first so we could know how to talk to the CRC.”

After the release of the report, the CRC reviewed their records and corrected them to correspond with SGA’s ledgers.

“It’s fair to say that we feel pretty comfortable knowing that we only had a few actual errors,” Hazlett said. “There was one club which spent $27.00 more than they were allocated. That’s the biggest error we had in terms of using money.”

The CRC did not provide the Technique with the updated records for review, saying that they wanted SGA to review them first.