From Sunday, March 4, to Wednesday, March 7, members of Mobilizing Opportunities for Volunteering Experience (MOVE) lived in tents, cardboard boxes and sleeping bags set up in front of the Campanile as part of the Hunger and Homelessness Awareness Week.

The group set up this makeshift accommodation, called “Shantytown,”  with the goal of educating the Tech community about different factors that play into homelessness, confronting common stereotypes and misconceptions regarding the homeless and showing students how they can engage and help address this social issue. 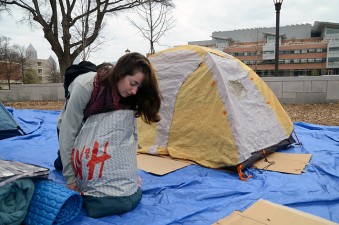 “Hunger and Homelessness Awareness Week is a great time for us to make an impact on the campus community.…It’s a good time to get people engaged with what’s going on in the city of Atlanta and in our world because these are very complex issues, and there is a place for everybody to be involved,” said Tomás Léon, chair of the committee and a fourth-year ENVE major.

MOVE, which coordinates community service projects in the Atlanta area, saw this week as an important complement to its typical direct service initiatives.

“Direct service is our main focus, but awareness is a big piece as well. If Tech students are not aware, they won’t be compelled to serve,” said  Lisa Thornsberry, MOVE president and a fourth-year ChBE major.

Approximately eight people stayed overnight in Shantytown, according to MOVE, about half of what the organization planned for. Thornsberry attributed the diminished attendance to the cold weather over the weekend. Still, Thornesberry viewed the event as a success.

“[Shantytown] has been a very visual piece to the intent of the entire week. We’ve had a lot of people stop by and ask why we’re doing it. That in itself has been accomplishing our purpose,” she said.

Léon said he had seen this outreach first hand.

“I’ve already talked to a couple of international students this week that had no idea that there was hunger and homelessness in the U.S. They just assumed that people were taken care of,” Léon said

Shantytown is only one of the several events that occurred during the week.

On Sunday, MOVE began its annual Hunger and Homelessness Awareness Week with brunch at Café 458, a local restaurant where all proceeds go to the nonprofit organization Atlanta Center for Self Sufficiency.

On Monday, 50 people participated in discussions about global hunger at a hunger banquet sponsored by MOVE and co-hosted by Oxfam at GT. Participants were assigned various socioeconomic statuses and got to experience at firsthand what it’s like to receive dinner for each status, some receiving more food than others.

On Tuesday, a panel hosted speakers who reflected on their personal experiences with homlessness. Kristy Kehely, a victim of drug and alcohol abuse, talked about her past mistakes that led to homelessness.