Approximately 1,500 students flocked to the Georgia Aquarium this past Thursday night on March 1 for Georgia Tech Night at the Aquarium, hosted by the Student Center Programs Council (SCPC) and the Residence Hall Association (RHA).

The aquarium houses over 500 different species and contains 8.5 million gallons of water. For the discounted price of $12, students were able to experience fully the world’s largest, per volume of water aquarium, which was open extended hours for participants. 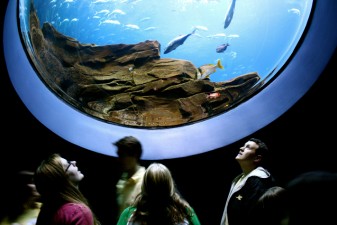 [/media-credit]“We’ve tried to focus on the fact that [the Georgia Aquarium] is a top tier aquarium and that it has these new exhibits,” said Sangita Sharma, SCPC President and a third-year AE major. “The goal is to get students out of the Georgia Tech bubble and into the Atlanta community.”

The fourth year of this annual event included something new — a dolphin show. New to the aquarium as well, the dolphin show was open to students while seating was still available.

“To incorporate the dolphin show was a pretty huge undertaking,” Sharma said. “It’s a huge financial burden and we have to get numbers to meet that, as well as logistics such as funneling that many people in there.”

As a result of the greater financial need from the dolphin show, student ticket prices were increased by four dollars from prior years. However, this total remains low compared to the $40 fee for general admission.

“To rent out the aquarium and to get the dolphin show cost approximately $30,000,” said Taabish Rashied, the chair of SCPC’s Atlanta Life Committee, who has also headed up the GT Night at Six Flags and World of Coke.

“Attendance was a bit lower than it has been in the past, but I think that’s also because we increased ticket prices to incorporate the dolphin show experience,” Sharma said.

However, student opinions seem to be positive about the event. The dolphin show was a big hit amongst students.

“I would go next year just to see the dolphin show again”, said Amit Rahman, a third-year BA major.

“I think that almost everyone that saw the dolphin show would say that it was the best part,” said Kyler Mullins, a second-year EE major. “The only the bad part of the whole thing might have been, for me, that it seemed like it didn’t last very long, touring all of the different areas of the aquarium.”

The dolphin show, however, wasn’t the only reason for student participation in the event.

“I hope to work with marine animals when I graduate…so going to the aquarium is always one of my favorite things to do,” said Jennifer Sohl, a first-year BIOL major. “The dolphin show was incredible.…It was a great way for my friends and I to de-stress after a busy week.”

In previous years, SCPC and RHA had brought in a full orchestra to provide other entertainment at the event. In order to cut some of the space and time requirements from the orchestra, male and female a cappella groups Symp Vibes and Nothing But Treble performed at the event.

Financially, the event broke even, and all money made will be reinvested in the SCPC’s remaining events planned for this semester.