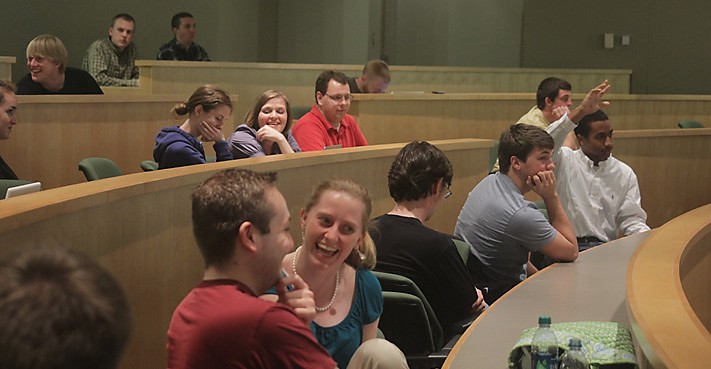 [/media-credit]Students gathered on Feb. 23 for an open forum to share student perspectives regarding the proposed Georgia House Bill 981. HB 981 would allow the concealed carry of a firearm on all educational campuses in Georgia, except for private institutions that choose to maintain their restrictions. Should the bill pass, Tech would not be able to opt out of the requirement to allow concealed carry on its campus.

The College Republicans, GT Marksmanship Club and Students for Concealed Carry sponsored the forum. The moderator for the discussion was David Wilkes, vice president of the Marksmanship Club.  Some students in attendance felt that this one-sided sponsorship contributed to the heavily biased nature of the debate.

“I thought that if they had reached out directly to more organizations, a more balanced debate could have been had,” said John Koch, president of the College Democrats of Georgia and a fifth-year HTS major.  “I look forward to trying to work with them to have a more fair discussion of the issues.”

“It was a bit disappointing that more people who are against it didn’t come out to let their thoughts be known,” said Andrés Celedón, chairman of the Georgia Tech College Republicans and a third-year PUBP major.

Many students at the debate spoke in favor of the proposed legislation, saying it would be a positive change for overall safety on campus and the surrounding area..

“I have been waiting for a bill like this for a very long time. I believe that the constitutions of our state and country afford me the right to keep and bear my arms,” said Stuart Michelson, CS grad student.

Other students in favor of the legislation cited the dangerous areas surrounding campus (including Home Park and English Avenue), the inconvenience of not having their weapons on their person and the unfairness of being unarmed given that criminals do not obey concealed carry restriction as reasons to allow concealed carry on campus.

A few students, however, were vocal in their opposition to the legislation.  Many of them said that relaxed gun restrictions for young, stressed and densely packed college students would be a recipe for trouble.

“The College Democrats at GT believe that HB 981 would create an environment detrimental to the Institute’s academic mission and would pose serious safety issues for the average Tech student,” Koch said.

Those students opposing HB 981 are not alone.  Both Chief of GTPD Teresa Crocker and Institute President G.P. “Bud” Peterson have voiced concerns about allowing concealed carry on campus in the past. No representatives of the police department or of the President’s office attended the debate.

Citizens involuntarily committed to mental health hospitals or drug or alcohol rehabilitation centers may not receive a concealed carry license within five years of discharge, unless allowed by a probate judge.

The bill also removes the governor’s right to remove firearm rights in an official state of emergency, allows the use of silencers for hunting purposes and requires the return of confiscated firearms to their acquitted owners following legal trials.