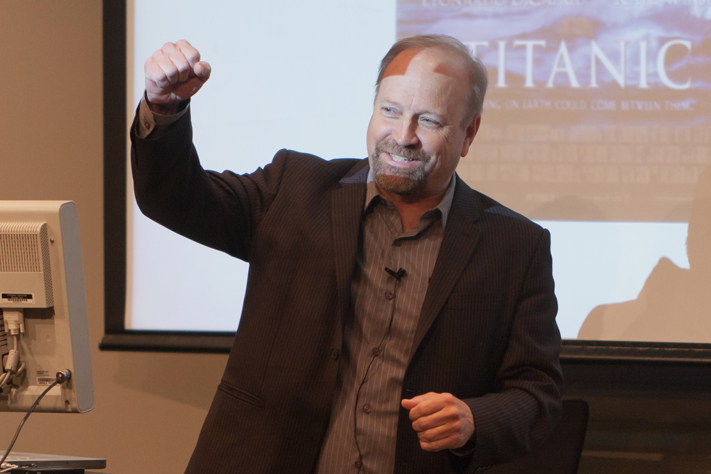 [/media-credit]“I have come to bring you some shocking news – scientists do in fact descend from human beings,” said Randy Olson, one-time scientist and now filmmaker, to a full LeCraw Auditorium in the College of Management on Wednesday.

Olson’s two films—Flock of Dodos: The Evolution-Intelligent Design Circus and Sizzle: A Global Warming Comedy—focus on what he feels is the difficulty scientists have communicating with the general public. He screened Sizzle after his talk and held a short panel discussion on climate change.

Olson believes that part of the problem lies in scientists suspicion of storytelling.

“There is a fear that stories are going to take you into lying and fantasies, but there needs to be an equivalent term like information structuring – and that’s what storytelling is,” Olson said.

The filmmaker suggested that scientists do not understand the power of the story and shy away from telling stories themselves.

“A story is when something actually starts to happen,” Olson said. “Scientists don’t get that…the scientists will invariably ask a group of communicators to tell the story.”

Olson pointed to the difference in reception between a documentary and a popular Hollywood movie to illustrate problems inherent in scientific communication to a broader audience.

“A documentary you all may know as Al Gore’s An Inconvenient Truth, in which a man stood up and gave a Powerpoint talk on film,” Olson said. “The second [film regarding climate change] was a bigger, broader, crazier movie called The Day After Tomorrow, a big budget action movie… Al Gore’s movie made $24 million, the big blockbuster made $180 million.”

However, Olson suggested that scientific writing and storytelling are not that far apart.

“The way in which [scientists] write their communications, the template used, bears a great deal of similarity to the way stories are told in the literary world,” Olson said, citing the fact that the introduction, methodology/results, and discussion parts of a scholarly work are similar to the general Act I, Act II, and Act III structure of a play.

In fact, the often-forgotten components in scientific writing that may turn it into a story are just a few simple items.

“‘And’ is this word you use when you’re in exposition mode. ‘And we did this, and we are doing this, and and and.’” Olson said. “If you string together a lot of ‘ands’, then people just start nodding off.”

Instead, Olson has a solution to keeping the audience of a scientific presentation in check and wide-awake.

“The most practical piece of storytelling advice ever is as simple as replacing ‘ands’ with ‘buts’ and ‘therefores’,” Olson said, referencing South Park director Trey Parker’s way of script creation. “[With the but], I have now lit up a question in your mind. That is the essence of storytelling — lighting the fire.”

A counter-intuitive programming in our brains, Olson said, also lends to another method of improving storytelling in presentations – focusing on the specifics.

“The more [examples] I tell you about, the less you connect with it, and the lesser the impact it has on you,” Olson said. “One death is a tragedy, but a million deaths is nothing but a statistic and a piece of information.”

Olson believes that this approach can help with presentations to any group.

“Those of you involved with science — this is not stuff just for wacky presentations to a general audience,” Olson said. “All of these dynamics hold truth for your talks with the science community.”