Michael Arad, Tech alumnus and designer of the 9/11 Memorial in N.Y. City, spoke as this year’s guest speaker for the College of Architecture’s Douglas C. Allen lecture. Arad’s design for the memorial was chosen out of over 5200 entries in Jan. 2004, and he has spent the last eight years working to see his vision become a reality. 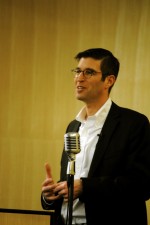 [/media-credit]Arad attended Tech from 1995 to 1999, earning his Master’s degree in ARCH after receiving his Bachelor’s degree from Dartmouth College.

“[Tech is] where I learned…the basis for my vocabulary as a designer and architect…[I learned] the process of how you think and how to approach problems,” Arad said.

After watching from the roof of his N.Y. apartment as the second plane struck the World Trade Center, Arad felt compelled to begin sketches for a memorial.

“I did [the first model] in many ways for myself,” Arad said. “There was no client, no program, no competition.”

When the competition to design the World Trade Center memorial began in 2003, Arad as the winner from eight finalists. He designed two pools set 30 feet deep, tracing the “voids” where the two World Trade Center towers stood. The design has water falling into the voids, a setting which Arad intended to speak to the inability to forget or replace the loss that occurred on 9/11.

One characteristic of the memorial is the strategy of arranging the names of the victims on the wide, bronze-plated slabs on the edges of each outline. Names are placed according to what Arad calls “meaningful adjacency.”

Thousands of letters were sent to families and friend of victims, asking for stories and names of other victims who knew their loved one.  Arad said placing the names was an “unbelievable, emotionally taxing task.”

“It takes a very difficult number, close to 3000 deaths, and personalizes it….When you hear about one brother, one sister, one father’s death, we can relate to it,” Arad said.

The Memorial Foundation has begun recording oral history from survivors and family members that can now be heard through smartphones when on site.

That construction process was certainly not one without its struggles and complications. During the construction process, New York City was experiencing a turbulent mayoral election, which threatened to slow down the memorial’s progress. Along with this unique issue, Arad and his colleagues dealt with the normal conflicts experienced during the design process.

During the early phases of the project, the original design was critiqued as “stark and austere” by officials. Arad struggled to find a way to design the memorial in a way that created an approachable environment.

“I imagined children playing, businessmen and women eating lunch, and others walking to their various offices.” Arad said. “You have a strong direction at the beginning of the process, but then along the way, you get to deepen it and enrich it.”

Arad stressed the memorial took a long time to design.

“The design you see today on the site is very much the product of a long and lengthy process…and not a design that could have emerged on day one…[but] at the end of the day, we were able to hold onto the idea we had at the beginning,” Arad said.

After the 9/11 Memorial’s completion, Arad has continued his career as an architect and designer and was recently selected to be a part of the judging panel for New York City’s St. Vincent Hospital one of the first hospitals to treat AIDS patients.