Tech students are more likely to collaborate on coursework than their peers at other universities, although they are less likely to receive academic and personal support from faculty, according to a report released last week by Institute Office of Assessment using data from the National Survey of Student Engagement (NSSE). 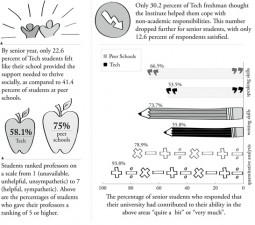 [/media-credit]“The results of the 2011 NSSE survey continue to show that Georgia Tech students find that the Institute sets high academic expectations and provides opportunities to participate in co-curricular activities…all of which provide preparation in solving real-world problems and work-related knowledge and skills,” the Office of Assessment wrote in the report’s conclusion.

The NSSE is administered yearly around the country to measure what Tech’s report calls “self-reported behaviors that correlate with positive learning and personal development outcomes.”

Respondents to the survey at Tech, 65.8 percent of whom were majoring in engineering compared to 23.4 percent at peer universities, indicated that they were more likely than their peers to spend 11 hours per week on class work. Tech students also indicated that they were more likely to feel that the Institute emphasizes spending time studying “quite a bit” or “very much.”

Although the report showed that Tech students were more likely than their peers at other institutions to feel that their experience at Tech contributed to their skill in analyzing quantitative problems, students at peer universities indicated that their schools helped improve their speaking and writing skills better than Tech did for Tech students.

The report also compared the 2011 data with data from 2008 and 2003. It noted significant increases in first-years who reported that they felt Tech helped teach them to work effectively with others “quite a bit” or “very much” between 2003 and 2011.

When looking at extracurricular activities, 30.9 percent of Tech seniors reported studying abroad, compared to 21.8 percent of seniors at peer universities. Tech students were also more likely to report that they had had serious conversations with persons of a different ethnic, religious or political group than themselves.