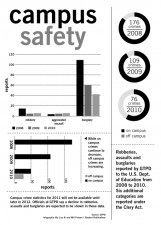 With the rise in Clery Act email alerts issued by GTPD, students are beginning to feel worried about their safety.

“I never minded walking back home late at night,” said Lady Dela Cruz, a first-year ISyE major. “Now, especially after that occurrence in November, I’m much more careful because I’m afraid of the possibilities that may take place.”

“For obvious reasons, crimes on campus worry me,” wrote Hannah Sells, third-year HTS major, in an email. “Risks to person and property should not be concerns for those trying to focus on their schooling. The loss of our reputation as an insulated safe place could also have negative consequences.”

Institute officials, however, view this instability in a different light.

“I think the reason that there’s a perception that there is a real crime problem at Tech is because we’re bending over backwards to ensure that we protect and inform our students,” said Institute President G.P. “Bud” Peterson.

Peterson expressed frustration with recent media coverage of alerts sent to members of the campus community.

“The first line is, ‘Georgia Tech police sent a warning to students and staff’,” Peterson said, referring to a recent AJC article covering a robbery on Tenth St. and Northside Drive. “Of course we did. I don’t think the story is that GT police sent a message—this story is about a robbery that didn’t have anything to do with Tech,” Peterson said.

“What many people don’t realize is that Tech has one of the best Clery Act systems in Ga., if not the US. We document it extremely well, which gives the perception that crime is up, even though Tech has one of the lowest rates,” said Eran Mordel, SGA Vice President of Campus Affairs.

The U.S. Congress passed the Clery Act, in 1989 in response to the 1986 rape and murder of Jeanne Clery, a nineteen-year-old student at Lehigh University. The Act requires all public universities to report and archive information regarding all crimes committed on or near campus.

As a result, Tech must alert the community of a crime that is reported to GTPD and is considered by Tech to represent a serious or continuing threat to the campus.

This year, 75 percent of crimes reported under the Clery Act have occurred off campus.

“We’ve kind of morphed into a bigger, broader area to cover than in the nine years when I first came and the challenges are that as recently as ’09 the robberies have come off campus have been a real problem,” said Chief of Police Teresa Crocker.

In addition, Crocker said the decrease of on campus crime may have allowed more attention to be diverted to off campus safety, resulting in greater attention to violations there and thus Clery Alerts.

However, this redistribution is not as simple as it may seem.

“The allocation and distribution of personnel of police force—there’s a science to it,” Peterson said. “This isn’t just, ‘maybe we ought to move somebody over to North Ave. because we had a crime there last night.’”

Despite the attention the administration is receiving from their aggressive policy regarding the Clery safety alerts, Peterson explained his primary motto for doing so.

Mordel said that safety begins with the student.

“Students need to be smart, be aware of your surroundings, make smart decisions,” Mordel said. “If you don’t put yourself in a point of danger, then Tech is a very safe place for you.”