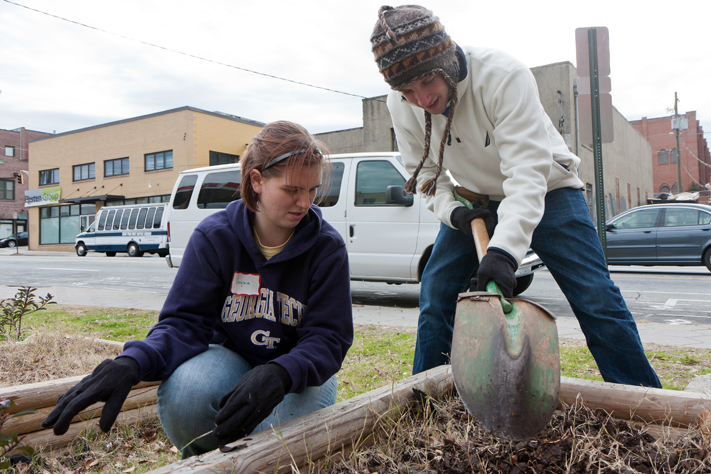 Being surrounded by this history coincides with this year’s King celebration theme: The Dream and the Journey Continue.

To begin the ten-day commemoration, civil rights activist Myrlie Evers-Williams delivered a speech disclosing her story of being a part of the civil rights movement in one of the most severely segregated states in the U.S. at the time.  Her achievements during the movement and thereafter, for which her first husband lost his life, place her in the ranks of women such as Coretta Scott King and Betty Shabazz.

Emma Bones, a fourth-year EnvE major, described the speech as “phenomenal and really quite moving.”

“[The speech] reminded me of just how far we have to go and how much change we have to embark on to make this world a better place,” said Gail Greene, Director of Human Resources in the College of Management.

A fresh Tech tradition that was started just last year made a return into this year’s schedule of King events: the campus-wide initiative known as the MLK Day of Service. Organizers provided Tech students the opportunity to serve in teams and engage in service projects with Metro Atlanta community partners instead of relaxing over the long weekend.

Over 150 volunteers checked in early at the Student Center Ballroom and worked until that afternoon partaking in projects like sorting coats for a coat drive; refurbishing used bars of soap into sanitized, new bars of soap that would be shipped out to other countries; finger-knitting scarves; and making peanut butter and jelly sandwiches as part of the Piedmont Project.

Attendees described the experience as eye-opening, uplifting and worth the hard work, keeping with the project’s motto, “A Day On, Not a Day Off.”

Organizers say that the King events at the Institute are unparalleled by other universities. 2011, marking the 50th anniversary of black student matriculation at Tech, rings with a special resonance. In 1961, Tech was the first public school or university in the Deep South to peacefully integrate without a court order, putting Tech in a significant role in the scheme of the Civil Rights Movement.

“Tech has always been at the forefront, whether it be technology, civil rights, or research. We’re always at the forefront and this is no different,” said Stephanie Ray, Dean of Students, of the integration milestone.

“We are well on our way for continuing the journey and dream that King had envisioned when he gave that famous speech in 1963,” Ray said.

In addition, being in Atlanta gives international students the opportunity to visit world famous King sites to celebrate the man’s work.

The relevance of the civil rights movement today is often in question, especially regarding different groups such as the disabled, the elderly and LGBTs.

“When we remember the wrong that has been done to one group of people, my hope is that it will help us prevent making new wrongs toward other groups of people,” Ray said.

“When we remember the wrong that has been done to one group of people, my hope is that it will help us prevent making new wrongs toward other groups of people,” said Dean Ray.