There is no denying the challenges today’s unstable economy provides. Reduced tax receipts and a political climate much more sensitive to spending than in years past have led lawmakers to carefully inspect every aspect of government budgets, including funding allocated for research.

While state funding has decreased significantly at Tech in past years, federal funding for research and development has increased by as much as eight percent, allowing for continued work on ongoing projects. In just the past decade, Tech has seen growth in science and technology expenditures of more than 200 percent – increasing from $304 million to $611 million.

However, this continued increase is not guaranteed for future years, and as the 2012 elections approach, there is even more uncertainty.

“This will be a year of anxious discussions with funding agencies and the legislative branch, stressing potential impacts on research, innovation, and economic development,” said Bill Cheesborough, Director of Research and Academic Finance. 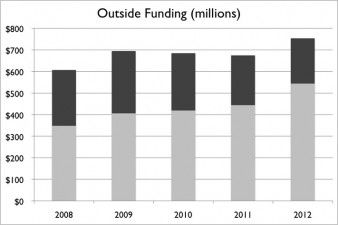 Educational communities in Washington in charge of obtaining funds for their respective universities remain cautiously optimistic about the future, however. According to the American Association for the Advancement of Science, total federal spending on research and development will shrink in the current fiscal year by about 1.3 percent from last year’s levels, but universities will be largely spared from these cuts.

Similarly, Cheesborough is confident that Tech will prosper in the near future.

“Regardless of the uncertainty…in times of cuts the places to be are the universities with the best research faculty and the best students — and here we are,” Cheesborough said.

To secure future federal money, there is a continued push from Tech’s representatives in Washington, D.C. to diversify funding sources and projects. Director of Federal Relations Robert Knotts and his staff in Washington work to secure federal funding for research from different government agencies and to make faculty in Atlanta aware of different funding opportunities in the forms of grants and competitions, as it is the individual professors who apply for funding, not Knotts and his office in Washington.

“Politicians can’t see into the future,” Knotts said. He continued to explain that that is why it is important to bring to light the research that the Institute conducts and important financial aid programs that benefit its students, like the Pell Grant program.

“Research and education are what make our future,” Knotts said.

Research funding is crucial to Tech because it pays for both the specific research project in question and contributes to overhead operating costs. In Fiscal Year 2011, Tech received 37 percent of its revenue from sponsored research, of which federal funds make up a large part. This amount is double the revenue generated by tuition.

Federal funds also assisted when state cuts were at their worst. In Fiscal Year 2010, the American Reinvestment and Recovery Act contributed $12.3 million in funds to offset cuts in state appropriations. Those funds have since run out, however.

A strong regional presence assists Tech in obtaining federal and state funds. Tech has launched 75 companies in the past decade, ranks as the number three patent producer in the state of Ga., and its overall benefits to the state economy are conservatively estimated at $6 billion annually by the Institute.

In the past 15 years, Tech has begun to work much closer with the National Institute of Health (NIH), as the College of Biomedical Engineering has rapidly grown in size and significance, increasing from almost no funding to more than $40 million.

More recently, Tech has begun to work closely with Department of Energy and the Energy Advanced Research Projects Agency, both of which have begun offering more funding opportunities to improve energy conservation.

Tech is also making headway in a relationship in the Department of Agriculture in areas like food processing technology, working on quicker and safer methods for food testing and improvements in the poultry industry. Work with the Department of Defense continues, making up half of Tech’s research dollars, dealing with a variety of projects such as aircraft engines.