viaCycle, a company set up by Tech alumni to provide seamless bicycle transportation, introduced their bike-sharing program to Tech in Nov. 2011. The program provides access to urban bicycles which contain an electronic lock system and connection to GPS that allows registered users to call or text their user pin in order to reserve a bike online.

“The original pilot called for six months of operation, so we’ll be growing the program throughout that period until near the end of the spring semester.  By the end of the pilot there will be 35 bikes on campus,” said Kyle Azevedo, CEO of viaCycle. The program first began with ten bikes in operation.

There are 225 users currently registered in the program, and an average of two bikes are rented per day. viaCycle plans to launch 15 more bikes this month as well as two additional stations. Currently, bikes can be rented out for free but viaCycle plans to implement a price structure soon. 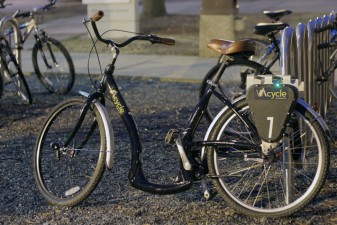 “Those [statistics] are good signs, especially given that our operating period was during cold weather and included Thanksgiving, dead week, and finals,” Azevedo said.

At the end of the pilot, the team will work with Tech to figure out a long term plan to develop the program and increase the number of bikes. “If the program does well, I see no reason why Tech’s campus couldn’t support 60 to 100 bicycles,” Azevedo said.

According to Azevedo, the program will require advertisement by word of mouth. However viaCycle will also print flyers and hold events and competitions to attract members of the Tech community. Incoming freshmen will be targeted since they are unable to bring cars to campus in their first semester.

The Bicycle Infrastructure Improvement Committee (BIIC) on campus has partnered with viaCycle to create racks for viaCycle bikes.

“[viaCycle relies] on us to make sure that there is sufficient parking especially as they try to expand their program in the future. Just the same, they’re a big part of [BIIC’s efforts to] try to get people out riding bikes,” said Johann Weber, Chair of BIIC and a PUBP PhD student. The Committee encourages the use of bikes and the improvement of the quality of bicycle infrastructure so that it is safe and easy to bike for pleasure, health and commute.

“Our committee would like to see [viaCycle] become one of the flagships for Tech in terms of us being a bicycle friendly university,” Weber said. “I’m really excited because most other campus bike-share programs are relatively low tech. Ours is certainly very high tech in the fact that it doesn’t require dedicated infrastructure. It is a lot more flexible.”

viaCycle requires those interested in the program to create a membership online on viacycle.com. A Georgia Tech email is required to register. Once registered, a member can text or call the number corresponding to a bike that he or she is interested in renting after looking at the map of available bikes. A bike will then be unlocked and ready for use.

The lock handles all administrative functions and transmits information about the usage and location of the bike when needed. There is no need for kiosks or racks to return these bikes due to the electronic locking system. viaCycle bikes can be found in various locations around campus and Midtown Atlanta.