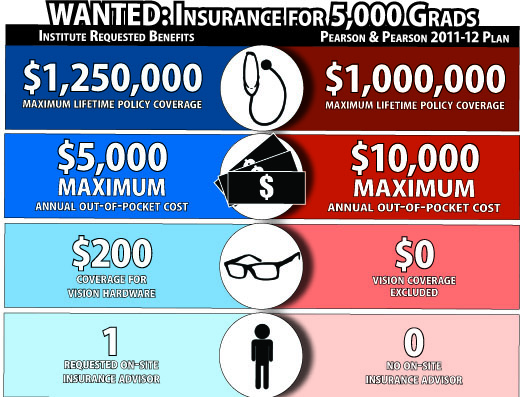 [/media-credit]The plan recently saw progress when the Request for Proposals developed by Tech completed its review at the state level and was officially approved by the Georgia Department of Administrative Services.

On Monday, Nov. 28, the proposals were released for bid to be reviewed in Jan. 2012, and it is expected that a contract will be decided in March 2012.

“Those of us involved here at Georgia Tech really wanted to make the bid process happen so we could have more information about which would potentially cost us more…staying with the [University System] or having our own policy,” said Brent Weigel, graduate vice president of Health Services. “We really feel like there’s a good chance that having our own health insurance plan would be more affordable and better for the students in terms of quality of service.”

In the past, the University System has had one deal for student healthcare that covers the majority of the state’s universities. Due to budgetary concerns and changes in federal requirements for coverage across the country, there is uncertainty about the possibility of increasing benefits while dealing with the reality of increasing costs.

According to student surveys collected by the Executive Cabinet of the Graduate SGA, grad students are generally looking for additional benefits out of Tech’s prospective insurance package.

The option of a dental plan is a request that many students have communicated with regards to policy proposals. It remains to be determined if expenses in the budget will allow for this previously unexplored benefit.

Cost management is another major goal for the proposed customized policy, because health insurance rates for graduate students are a significant part of their fees. The student and administrative teams working to develop the new plan want to make sure that the new premiums are both cost-effective and successful at overcoming past challenges.

As a part of the process for putting the new plan forward, the development team also hopes to improve general student understanding of health insurance policies. Making students aware of the details of their coverage has become a must for emphasizing the value of these policies.

“There have been some issues with the clarity, simplicity and transparency of student health insurance plans…a lot of students are confused about what is covered and what is not covered [under the current policy], and it comes down to student knowledge, education of how these systems work and how this information is communicated to students,” Weigel said.

Tech is not alone in its decision to break away from the current health insurance arrangement. UGA has chosen to do so as well, but Tech has uniquely elected to involve its own health services in the dealings. A small cross-functional team was created to represent the interests of the Institute in these matters, incorporating the efforts and expertise of members from health services administrations.

“Everyone from administrators to the president has been very supportive of this process and our desire to effect some change for students and health insurance. We’re talking about a journey that has been years in the making. We still don’t know the final decision for how all of [the negotiations] will play out, but we do have the right people on our side,” said James Black, Graduate Student Body President.