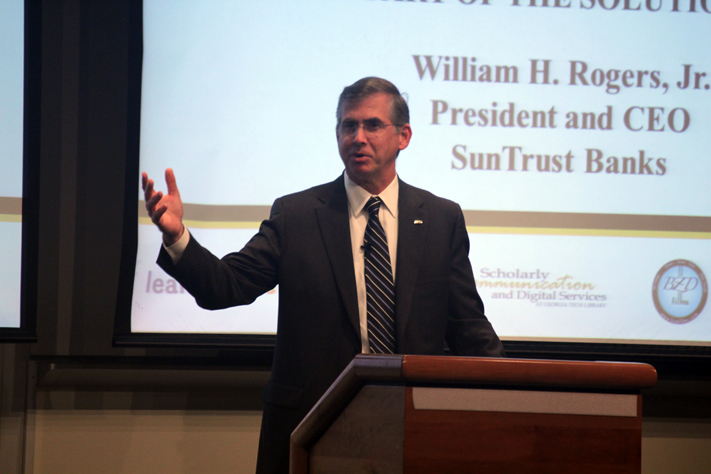 Bill Rogers, President and CEO of SunTrust Bank, addressed students and faculty at the IMPACT Speaker Series on Wednesday evening.

“It is truly a privilege to be able to hear and learn from notable business leaders such as Bill Rogers at the weekly IMPACT Speaker Series. Listening to successful leaders share their experiences and provide advice is very insightful,” says Kia Andrews, President of the Society of Women in Business and a third-year BA major.

Rodgers spoke about SunTrust’s ongoing positive relationship with Tech, including its active recruitment of student talent in all academic areas and a recent $200,000 charitable pledge to the Institute. He strongly highlighted the parallels between the SunTrust and Tech “brands,” and how these brands are each built upon reputation and trust.

Trust among banks is at an all-time low, with more than half of troubled borrowers declining to negotiate with their bank prior to foreclosure or bankruptcy. Rodgers stressed that SunTrust is working to restore public confidence in the company, through both continued lending and community service programs. SunTrust employees volunteered more than 100,000 hours last year and facilitated financial education programs in the Atlanta Public Schools in efforts to support the communities in which SunTrust does business.

After his address, Rodgers was asked by a student about SunTrust’s implementation of a $5 fee for debit card users, a controversial decision that prompted some customers to leave the bank.

“We wanted our customers to have a place in the dialogue, and after asking what they wanted, we heard concerns about flexibility,” Rodgers said.

He explained that the debit card fee allows additional choice for customers about which services they receive and thus more control over how they are billed.

Another question came from George Chidi, a journalist, analyst and Tech MBA alumnus. Chidi asked about the Occupy Wall Street movement, and whether Rodgers felt that any of its demands were valid. Rodgers replied by emphasizing the necessity of considering the opinions of everyone and by quoting a protester from Toronto.

Chidi said this response did not address the problems within the financial services industry that inspired the movement.

“It’s instructive to note that, while dismissing Occupy Wall Street with an incoherent, cherry-picked quote, he ignored a very specific, well-informed question about the role weak accounting rules plays in America’s distrust of banks” Chidi said.

Rodgers assumed his role at SunTrust in June 2011, after holding various positions within the company for more than three decades. He has worked in the areas of corporate and commercial banking, corporate finance, retail banking and mortgage banking. He spoke at Tech as part of his efforts to reach the public in town-hall style forums such as IMPACT.

The IMPACT Series is Atlanta’s largest university-based speaker series, with weekly presentations that are free and open to the public. Topics include entrepreneurship (both social and commercial), innovation, leadership, and sustainability.

The program is designed to widen students’ horizons and understanding regarding these important issues, as well as to engage the Tech community in the important debates that are often discussed in national and international arenas.

IMPACT is run by the Institute for Leadership and Entrepreneurship at the College of Management.