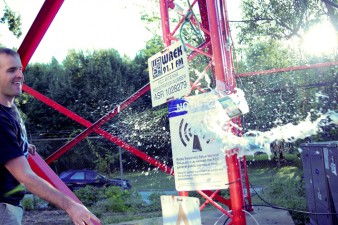 WREK radio increased the wattage at which they broadcast earlier this week, completing a ten-year project to raise broadcasting strength from 40,000 to 100,000 watts.

The new antenna now allows the station to broadcast at a much higher rate. As a result, the station is quickly gaining listeners from beyond Metro Atlanta.

The project, which has been 10 years in the making according to WREK Radio General Manager and second-year AE grad student, Jonathan Walker, cost approximately $231,000. Apart from finances, the reason that it took so long for the station to achieve this increase in wattage was that listening restrictions did not make it possible for a perfectly round radius of listenership.

According to Chief Engineer Daniel Smith, a first-year EE Graduate Student, that is the only kind of range most antennas can broadcast. WREK Radio was forced to search for a design company that would make the kind of antenna that would be capable of broadcasting to such an irregularly shaped listening zone.

“This lengthy initiative really began back when we began saving our money for the project,” Walker said.

The first direct step towards the project was in 2007 when WREK got a new transmitter line. In 2008, the staff made inroads when a new transmitter was brought in. In the same year a manufacturer was found that did not deem the task of creating an antenna for an irregular broadcast range impossible.

“SGA was instrumental to the success of this initiative. We really could not have done it without them,” said Walker.

As a result of the increase in wattage, listeners as far north as the Tennessee boarder can listen to WREK Radio. According to both Walker and Silver, WREK Radio has received correspondence from listeners as far as 70 miles away that reports listeners’ enjoyment of the new programming.

“WREK Radio is unique in that it does all of its own engineering and technical work, tasks that many other college stations typically hire people from outside of the school to manage,” Smith said.

To commemorate this landmark, the WREK Radio crew is hosting a celebration that will include free food, an open house and a chance to get to tour around the antenna.  This event will be open and free to anyone in the Tech community who wishes to share in a part of WREK history.

WREK’s latest investment will ensure that the quality and the pride of its long-running station can be accessed by a much larger audience.