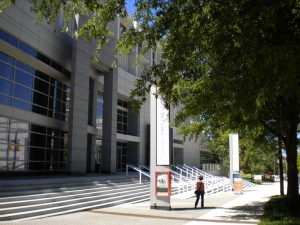 [/media-credit]
Students enjoyed art, music and theatrical performances on the evening of Thursday, Sept. 29, during GT Night at the Woodruff Arts Center.
The GT-WAC initiative, now in its second year, is open to all students and provides an opportunity to engage in the arts off-campus by allowing free admission to the High Museum of Art, and free tickets to an evening production of the Alliance Theater or Atlanta Symphony Orchestra.

The initiative is organized and funded by SGA, the Division of Student Affairs, the President’s Office and the Ferst Center for the Arts.

“GT Night at Woodruff Arts struck all the right notes, rightly encouraging the scientists and engineers of GT to broaden their horizons with exposure to the arts,” said Allison Braden, a second-year IAML major. “I am excited to see GT partner with Woodruff to bring a greater degree of arts appreciation to Tech students.”
The special exhibits open to student viewing at the High included a series of avian-themed sculptures by Grainger McKoy, feminist-inspired prints of Kiki Smith, and the Huber collection of twentieth-century American art. Students were able to explore all of these exhibits in addition to the museum’s permanent galleries.
Members of the Tech Band performed on the piazza during the evening, allowing participants to enjoy classical music as they arrived at the event.
“When I was approached with the invitation to play in a brass quintet for the Woodruff Arts night, I immediately accepted. We ended up playing for about an hour and I absolutely loved it. What better way to spend a Thursday evening than at the museum?” said Joshua Porter, a first-year BME major.
The Alliance Theater presented Into the Woods, a musical fusion of classic Grimm fairytales. The symphony was not performing, but in its place the Hertz Stage featured Broke, a satire of Corporate America and the current economic crisis. Students were given first-come-first-serve access to free tickets for one performance of their choice after browsing the museum and enjoying refreshments.
As a part of the continued push for arts around campus, students also are currently able to access the High Museum, Alliance Theater and Atlanta Symphony Orchestra with the Woodruff Center All-Access Student Pass via further collaboration between The Woodruff Arts Center and Georgia Tech.
For $20, student cardholders receive free admission to galleries and performances at the museum, theater and symphony. The pass can be purchased from the Ferst Center for the Arts box office located on the second floor of the Student Center, though students were also able to purchase the passes at GT Night at the Woodruff.
“It’s awesome that I can attend performances as much as I want for free with the Woodruff Arts Pass. I’ve spent upwards of $60 for tickets to the ASO in the pass and now for the $20 that I paid for the pass I can see as many shows as I want all year,” said Joe Boltri, a first-year BME major. “This exposure to the arts will really help to broaden my horizons and give me a sense of culture outside the GT bubble.”
Free transportation was also provided by SGA in the form of Stinger buses to and from the event for students.
“The financial support SGA provides to fund Stinger transportation to GT Nights at the Woodruff is fundamental to the success not only GT Nights at the Woodruff, but to maintaining the partnership with the Woodruff Arts Center so that future students may continue to enjoy the benefits of vastly discounted space rentals and affordable season passes. Cutting transportation funding would jeopardize this unique cultural opportunity that reaches many hundreds of students each year,” said Justin Keating, SGA community relations chair and a second-year BA major.
Many of the students reported that the event was quickly becoming a welcomed Tech tradition. Several hundred students attended this year, and there are hopes for higher attendance in the future.
“GT Nights at the Woodruff provide an opportunity for all students to experience some of the world-class cultural venues Atlanta has to offer while escaping the stress of midterms, exams, and projects,” Keating said.