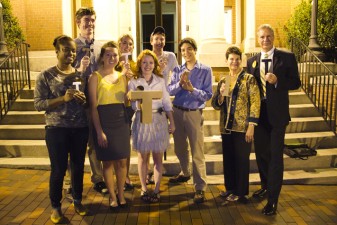 SGA hosted a week-long event this week called ‘Keep the T’ in Tech to discourage T thefts on campus. The goal of the event was to tell students that stealing T’s from signposts is not an accepted practice at Tech.
The initiative was organized by SGA when concerned administration officials and students raised the issue of stolen T’s. There have been complaints that the exploit can cause confusion for visitors new to campus, as well as reflect badly on the Tech community. Donors and alumni often view this as detracting from the aesthetics of the school.
“A couple of weekends ago most, if not all, of the Ts in the new Clough Commons building were taken [from] the entire fourth and fifth floors. It was really unfortunate timing because the building was dedicated just this past weekend…it’s obviously a place that we’re all taking a lot of pride in, and it reflects poorly on something that people have invested so much time and money in,” said Elle Creel, Undergraduate Student Body President.
The implications of what may be considered a harmless prank are made more serious by the fact that defacing signs and official Institute buildings in this manner also presents a significant financial burden for the school. In the past year alone the Institute has spent close to $100,000 in the course of replacing the stolen T’s on campus.
Commencing a proactive student-led effort through SGA was intended to increase awareness of the problem among the students who are perpetuating it. The student leaders involved in organizing and spreading the word about the campaign spoke out for its importance at SGA’s Open Forum that took place on Tuesday night.
“[Freshmen] don’t really understand the repercussions of stealing Ts right now…they just feel like they’ll get slapped on the wrist and sent on their way for scraping a sticker off of a sign…and because they also feel like that’s the tradition, they almost in a sense feel obligated to steal Ts,” said Alex Bandes, freshman class president.
The tradition of stealing the large, symbolic letter T from Tech Tower originally began in the late 1960s. However, since the tragic incident that occurred twelve years ago when a student was killed while climbing the Alexander Coliseum, the feat of stealing the T from Tech Tower or scaling any Institute building has been prohibited on the threat of expulsion for the students’ safety. Though students have taken to stealing T’s around campus as a way to carry on the spirit of the tradition, punishments will still be given to students participating in these activities.
“The administration will be taking strong disciplinary action against students who are found stealing T’s and we certainly don’t want any students who are under the impression that this is a tradition or something that we support to be unaware of the consequences,” Creel said.
One of the highlights of the week’s Keep the T in Tech campaign was Wednesday’s event “Live the True Tradition.” The lights on the Tech Tower T’s were turned off as a way of honoring the original achievement of stealing the T, allowing students to experience what it would be like if the iconic letter disappeared and distinguishing this impressive tradition from the act of stealing T’s from campus signs.
Another was the “AmnesTy” event where students were allowed and even encouraged to return stolen T’s without fear of punishment.
“Stealing random T’s really looks like vandalism…this is our campus and a part of our Georgia Tech experience, so we should want [the campus] to look as great as possible because people who used to go here still care about our campus…and we should care about our campus now,” said Vett Vandiver, Vice President of Communications for SGA.