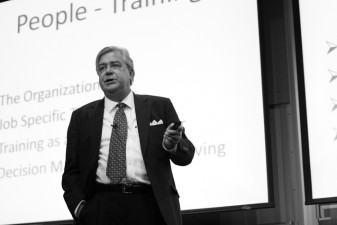 On Wednesday, Sept. 14, the IMPACT Speaker Series continued with a presentation by George Israel, President of the Ferst Foundation for Childhood Literacy.
Israel, who is experienced in business, government and the non-profit sector presented on “The Keys to Building Successful Organizations: People, Production, Profit.”
Israel introduced the foundation and its initiatives in developing a more productive and educated workforce by distributing books to children with the help of partners in 76 counties in Georgia.
Israel also talked about the skills required to be a successful leader. He discussed job descriptions and interview strategies that companies use to recruit candidates. Israel was the CEO of the Georgia Chamber of Commerce from 2002 to 2010. He was also appointed as the Mayor of Macon from 1979 to 1987.
“In the state of Georgia there are 750,000 children under the age of 5…Imagine if every child was read to at least once a day, imagine the difference we can make in reducing crime rates,” Israel said.
The Ferst Foundation for Childhood Literacy’s mission is to prepare preschool children in Georgia for reading and learning success. Each month, a new book is mailed to every registered child under the age of five with the hope that every child enters Kindergarten after being read to by their parents. The “Imagination Library” is at no cost to registered children and they are allowed to keep books for future reading.
According to Israel, 85 percent of the parents receiving the books reported reading to their children every day and hence the project has been successful. The project also helps develop bonds between parents and children and increases parental awareness of their children’s reading levels. Israel also reported a drastic increase in average test scores on the Criterion Referenced Competency Tests (CRCT) taken by 8th graders in Morgan County enrolled in the program. After highlighting the accomplishments of the Ferst Foundation, Israel continued to talk about requirements for the formation of a successful organization.
“It’s the people that supply the ingenuity, creativity, their education and their experience,” Israel said.
Israel explained the “three P’s” to successful organization: People, Production and Profit. According to Israel, the most important factor in recruiting employees is the job description. He explained the importance of gaining relevant information about a candidate’s behavior such as the objectives of a particular candidate and his or her activities. He talked about the necessity of hiring candidates that fit a particular position. He continued to explain the system of three interviews that should be conducted while hiring candidates.
“You want to validate and zero in on the weaknesses and ask open-ended questions that encourage them to talk,” Israel said. He talked about being able to judge whether a candidate is perfect or is a misfit for a position at the end of an assessment. He explained about the importance of a leader that shows interest in his or her people in order to motivate them to get required goals accomplished. Israel continued to talk about leadership.
“Leadership is a process by which a person influences others to accomplish objectives. Good leaders are made, they are not born,” Israel said, highlighting the characteristics, objectives and accomplishments of historical leaders such as George Washington and Napoleon. Israel explained the different types of leadership and whether physical and intellectual traits such as height, extraversion, fluency and intellect correlate with the ability to be a leader.
“What do you want your epitaph to read about your career at the end of your life? What do you want people to think about you when you get to the end of your business life?” Israel asked.
A number of students and faculty members attended the event.
“I’m genuinely passionate about literacy and wanted to see what the scene is like. It was good to get a sense of the reality. He works more on ideologies…I was expecting more detail on how to build a successful company,” said Urvashi Goverdhan, a third-year CS major.
Since 2002, the IMPACT series has been a weekly event that has brought business leaders to campus to share experiences and to provide leadership advice.