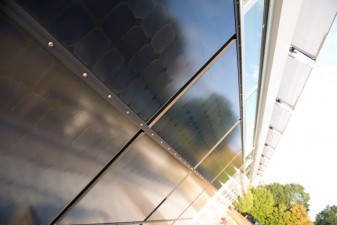 The Georgia Tech Research Institute (GTRI), along with its industrial partners Suniva, Radiance Solar and other companies, was recently awarded a $2.8 million grant from the Department of Energy’s SunShot Initiative to design more cost-efficient solar panel technology.
If this project, entitled SIMPLE BoS, is successful, the more inexpensive innovations could lead to “a bigger market for solar panels in the environment, which means more jobs, [especially] for Tech students,” said Joseph Goodman, leader of GTRI for SIMPLE BoS and Research Engineer at GTRI.
GTRI is also receiving the help of the ME department, the COA and the Center for Biologically-Inspired Design (CBID). CBID will seek to inspire the design team, composed of the ME department and the CoA, by using biological principles found in nature as solutions for reducing the overall cost of solar panels.
“[Biologically-Inspired Design] has the capacity to not only produce novel technologies that are more efficient and life-friendly, but [also] change the way engineers and biologists think about their craft,” said Marc Weissberg, Co-Director of CBID, in an e-mail. “It gives engineers a whole new tool-kit, and shows how deep biological knowledge is important to other areas besides medicine, or basic science.”
For starters, the implementation of solar panels can be broken down into two principal areas: the photovoltaic (PV) cell itself, which converts the solar energy into electricity, and the balance of the system, which includes other important processes, such as materials, wire management, racking [and] mounting and interface to utility.
“Since the industry has done such a good job of making PV cells more efficient and lower cost, there has not been much focus on the balance of system,” Goodman said.
The balance of the system takes up a good chunk of the cost of producing and integrating solar panels into an existing environment.
Through the SunShot initiative, GTRI and its partners plan to reduce the cost of the solar panel to about $1 per watt. GTRI and its partners also plan for a 75 percent reduction in solar cost, which will render the cost of solar energy equivalent to that of burning coal for electricity.
In other words, solar energy could be cost-efficient enough to become the citizens’ primary source of power.
“You’ll be able to look at your electricity bill and solar panel bill and say ‘All right, well, it’s about the same amount,’” Goodman added.
Goodman, who received his Masters in ME from Tech, said that winning the grant was made possible by “the deep student engagement, coupled with the industry partners who have a track record of commercialization and low-cost installation.”
It will be these groups of students, whose numbers can range from 50 to 100, who will come up with ideas for SIMPLE BoS through research, capstone projects and the like.
Faculty and leaders of SIMPLE BoS will then work closely with the industry to perfect ideas by imposing on the projects realistic constraints that the solar energy market faces.
Working with Suniva has “given [the students] another degree of freedom in design,” according to Goodman, since Suniva manufactures photovoltaic cells, and these cells can later be modified to suit an outstanding design rather than vice-versa.
GTRI hopes to have a product ready for commercial use within the next three years. Within five years GTRI plans to introduce a solar panel product to the market.