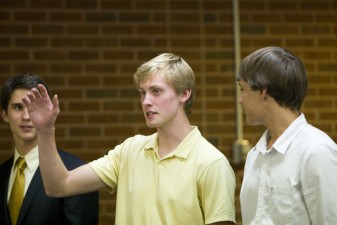 Last week, freshman elections for SGA’s Undergraduate House of Representatives (UHR) came to a close, as Alex Bandes, an ME major, was named President, while Emily Russell, an IE major, Gillen Heisler, an IAML major, and Alex Letov, a BME major, claimed other representative positions. Bandes took the lead with 305 votes, Russell with 300, Heisler with 252 and Letov with 249.
As the results show, Bandes won the position as president by only five votes.
“The close margin just indicates that [we] are really going to have to work together to come up with solutions to campus issues because the constituents’ votes were split so evenly. I think it reflects the diversity of our student body and our representatives,” Bandes said.
“There is a wide range of opinions as far as what people would like to see changed on campus, including dining hall selections and campus transportation. They also seem to be interested in a few SGA-sponsored freshmen social events—something I am really excited about,” Bandes said.
Russell’s plans include addressing the pressures associated with being a new Tech student.
“One of the biggest issues facing Tech freshmen is achieving a balance between academic success and being connected socially with their peers…I plan to promote student study programs and provide ways for students to connect both in and out of the classroom,” Russell said.
Meanwhile, Heisler is focusing on other areas of potential concern.
“Some plans [we] have in mind are trying to make the campus more handicap-friendly, increasing the use and availability of BuzzCard at local businesses, addressing many dining hall complaints, making some improvements to the dorms around campus and streamlining the Buzzport website to make information about clubs and organizations more readily available,” Heisler said.
During the election, two candidates, Heisler and Michael de la Guardia, who came in fifth in votes, had elections violations, causing each to lose approximately 10 percent of their votes, respectively.
Some students expressed that they did not feel a significant presence from those campaigning.
“I didn’t have time to meet the candidates and an uninformed decision only hurts the election process,” said Richard Benifeld, a first-year MGT major, of why he did not vote in this semester’s elections.
“I didn’t vote in the election because I was uniformed about where to go, when to vote, and who the candidates were,” said Marvin Orrel, a first-year UEC major.
Despite less visibility than most freshmen expected, one notable aspect of this year’s campaign was the use of diverse advertising strategies.
“I definitely think Facebook was really involved, but I think it was actually detrimental to the campaigns because it was overused,” Benifield said.
“My campaign strategy was to go out and meet my fellow classmates and express my enthusiasm for serving as their representative. I think that letting people meet you and get to know you is the most effective approach,” Russell said.
“My campaign strategy involved advertising to the freshmen class through flyers as well as one on one interaction,” Bandes said. “Tech has a great, personal atmosphere, where just about everyone is willing to talk to you. I found that a lot of people wanted to learn about the election if I just gave them a little bit of information about what was going on.”
Since the new freshmen representatives took oaths to become official members of the UHR on Tuesday, Sept. 20, they will need to work together and with representatives from other classes to meet all the needs of their constituents.
“All I can say is that I am extremely anxious to work hand-in-hand with many of the most intelligent, hardest working student leaders our great school has to offer in the Student Government Association,” Heisler said. “I know we may not see eye-to-eye on some issues, but it is our duty as elected representatives to do our job responsibly and in the best interests of the Tech community as a whole.”