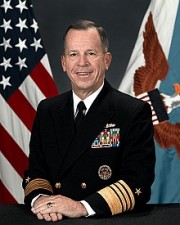 Adm. Mike Mullen, Chairman of the Joint Chiefs of Staff, visited the Ferst Centeron Tuesday, Sept. 13 to speak on the importance of  assisting returning servicemen and women in their reintegration into civilian society. Preceded by a panel of three people with first-hand experience with service member reintegration, Mullen spent one hour presenting and taking questions from the audience.
When Mullen took the stage, he was greeted with a standing ovation. He proceeded to talk about the value of returning service people.“[Veterans] have generated a debt, which, in my view, cannot be repaid. We need to do all we can to recognize that and take care of them for the rest of their lives,” Mullen said.After the floor was opened up to questions, one audience member asked Mullen what type of scientific research he believed would be the most important militarily for the next several decades.

“We’ve got to protect ourselves in the cyber world,” Mullen said. “Cyber has moved from one of those warfare areas off to the side to mainstream warfare. There’s not a military leader…that doesn’t need to understand the cyber challenges we have.”

Mullen also said that the modern military is the largest volunteer force the U.S. has ever fielded and that the protection and preparation of this valuable resource through strong logistical and medical support is of the utmost importance.

The panel that opened the town hall – consisting of Precious Goodson, the wife of a returning veteran, Staff Sgt. Daniel Lister and Richard Sisk, a veteran – spent their time identifying the problems they saw in reintegration as well as the organizations, people and practices that were the most helpful to them.

Sisk, now a student at Kennesaw State University, discussed the difficulties of leaving comrades in Iraq and Afghanistan as he began his civilian life back in the United States.

“I would get phone calls about friends getting wounded…or friends getting killed.  That was the toughest part, the guilt – wondering could I have been there to do something, if I should have stayed in the unit,” Sisk said.

The panelists spoke of the support they gained from their families, churches and communities.

“My wife was right there to pick me up whenever I was feeling sorry for myself. She was just not gonna have it,” Lister, who had lost a limb in Afghanistan, said.

Goodson, as caregiver for her husband, provided a different perspective on the difficulties associated with reintegration.

“I left my job as a teacher to take the job of being my husband’s caregiver, supporter, administrative manager and advocate,” Goodson said in her introduction. “That’s what my husband needs right now.”