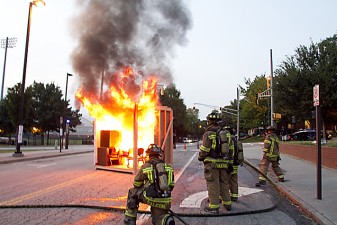 In observance of National Campus Fire Safety Month, Tech hosted its fourth annual educational program iPrevent on Wednesday evening. The event gave students an opportunity to participate in fire safety training sessions, learn about new technology in fire detection and witness a demonstration in which a fire, supervised by the Atlanta Department of Fire Rescue, was staged in a model dorm room.

The Environmental Health and Safety Office (EHS) at Tech developed the program to inform students on the importance of basic fire safety procedure, and the risks presented by negligence in this area. The mock dorm room fire was the highlight of the event, increasing awareness of how quickly flames can spread and result in property damage, injury or death.

Oftentimes, lack of awareness and operator error are the greatest causes of fire alarms in campus housing. In the past year, there has been one kitchen fire in the Graduate Living Center and three microwave-related fires in other dorms. According to the EHS website, cooking equipment causes 72 percent of fires in residence halls. Even incidents that do not result in a fire breaking out can produce enough smoke to trigger the smoke detectors and prompt a total evacuation of the building.

“Nuisance alarms are caused by occupant actions that typically result in an accurate response from the fire alarm system. On [most] occasions students were attempting to heat or cook food in a microwave in their dorm room,” said Campus Fire Marshal Larry Labbe.

For this reason, incidents concerning fire alarms going off outside of scheduled drills due to mishaps in the kitchen or other various causes have become business as usual for students on campus. While these events are a source of frustration, they have not yet become a recurrent disturbance.

“Fire alarms are set off a lot in North Ave. People burn things, and we all have to leave, but it’s kind of normal. It doesn’t happen often enough for anyone to get really [upset] about it, though,” said Sapphire Liu, a third-year IAML major.

Fire alarms that are pulled without cause can be problematic as well. Not only are these incidents disruptive to the inhabitants of the building, but the misuse of fire safety equipment serves to compromise the legitimacy of fire safety procedures in general.

“Every time we have an alarm that turns out to be illegitimate, we have a [situation] where the building occupants start to doubt the reliability of the fire alarm system. Complacency sets in, and this is where the real danger begins. With complacency comes delayed or no evacuation of the occupant…in the event of an actual fire, complacent behavior could cause the occupant his or her life,” Labbe said.

The safety procedures emphasized during the iPrevent program provide valuable information, but it is up to students to implement them in case of an emergency.

“The majority of the students are performing well during evacuation drills… [but] just like in athletics, you play how you practice,” Labbe said. “Take the evacuation drills seriously and practice how you would actually respond to a fire in a building. We have had a few occasions where either the occupant did not hear the fire alarm or chose to stay inside. Most belongings can be replaced…the only thing I know we cannot replace is your life.”