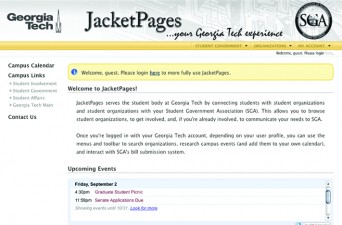 SGA has developed and upgraded the JacketPages system designed by Kurt Nelson, a third-year CS major who won last year’s SGA-hosted competition for a redesign of the website used to promote organizations and to organize bill submissions to SGA.

“One of the most valuable things about the [new] system is that it is designed by us and hosted by OIT on [Tech’s] server,” said Graduate Student Body President James Black.

Previously, the JacketPages website was designed and run by Collegiatelink.

Another benefit of this system is the cost reduction. It cost SGA around $6,000 to develop the new system, which is less than half of the yearly cost of the contract with the Collegiatelink, according to Black.

One administrative advantage with the new system is the change in the process of bill submission. The new bill submission process operates in line with how SGA votes on them.

“Items are in tabular form, so it’s easy for SGA to see them and for the organizations to submit,” Black said.

In addition to making bill submissions easier for organizations, JacketPages has easy access to fiscal information for SGA.

“[With the new system] we are going to have the ability of exporting the fiscal information for a given fiscal year. So, we will have really easy access to that data,” said Michael Ellis, vice president of Internal Affairs for SGA.

Furthermore, this website has the same CAS login system and overall theme used by other campus-based websites.

“If you are used to using Buzzport, you will be able to use JacketPages easily,” Greenwood said.

The new interface is less cluttered. When a student logs in, he or she needs to update a user profile. Afterward, students can use menus and toolbars to search for organizations and events on campus.

“Advantages of having the system designed in-house are that we can make minor updates and fix bugs quickly,” Ellis said.

The new system can accommodate needs of the Tech community in a timely fashion. According to Ellis, it will not take more than a week for the in-house developers to incorporate a new feature into the system, whereas, with the former Collegiatelink system, the Tech community had to wait for almost a year for a similar feature to be incorporated by the developers of the Collegiatelink team.

A new calendar feature has been incorporated in the new system. Organizations can add events to this calendar that can be viewed by the entire Tech community.