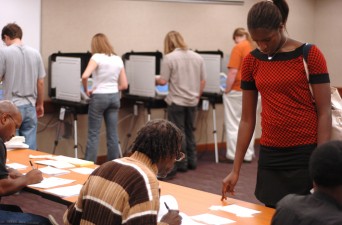 [/media-credit]As voters prepare to decide in fewer than five weeks who will hold the presidency for the next four years, a controversy has arisen that could affect turnout at polling stations across the country.

Georgia is one of 30 states that have enacted voter ID laws requiring individuals to show identification before they can vote. In Georgia, a government-issued photo is required, while other states accept a  bill or credit statement. These measures are intended to confirm that people are eligible to vote, do not cheat the system and are who they say they are.

“I think it’s important that they’re trying to prevent [voter] fraud, because people could vote twice and this is a way to check for that,” said Stephen D’angelo, a third-year CMPE major.

Recently, voter ID laws have been challenged by opponents who believe the measures could adversely affect members of certain minorities, for example, elderly and low-income groups that may find it difficult to obtain an official ID. The conflict between discouraging ineligible voters and protecting the fundamental rights of citizens has become a heated issue this election season.

“I think they should try to find another way to prevent people who aren’t eligible to vote from voting, because if someone wants to vote then they are making an effort to actually go out, have a say and have an opinion that they want to be heard,” said Madhuri Tondepu, a fourth-year CS major.

A Pennsylvania judge ruled on Tuesday that the strict voter ID law would not be enforced in the state during November election. Federal judges put a similar law on hold in Texas on the basis that state officials failed to prove that the measures would not undermine the voting rights of minorities.

“I definitely think that there should be voter ID laws because they regulate who can vote and who cannot, but at the same time I do understand the [concern about] minorities. I am a minority, and for a long time I couldn’t vote because I wasn’t a citizen. And for my parents, even though they had a say they couldn’t [exercise] their freedom of speech because they weren’t citizens yet,” said Palavi Vaidya, a first-year BME major.

The Pennsylvania law will be reconsidered in a hearing set for December, but there have been arguments that it could be a less crucial issue after the election.

“I think that after the election it’s going to be a non-issue…even the politicians will drop it. Because it’s an election year and the country is so polarized politically, they’re trying to win points on every side that they can,” said Trevor Siu, a fourth-year AE major.

Much of the controversy surrounding voter ID laws is based on the idea that groups that could be disenfranchised by the measures have traditionally Democratic leanings. Along these lines, according to a report by NYU’s Brennan Center, the resurgence of Republican legislative majorities in 2010 coincided with the introduction of voter ID laws.

“The timing and verbiage used in the bills passed make me think that it is more of a political play than it is a play for voter integrity. It could be used by parties to push middle-of-the-road voters to the side because you create a politically divisive issue that tends to fracture people,” Siu said.

There have been few recently documented cases of voter fraud, with one out of every 15 million voters guilty of the crime according to an investigation by News21.

“I think that the law is not the best way of handling the situation. The right to vote is more important than trying to avoid what may be a [small] percent of voter fraud cases,” said Kathryn Daniel, a fourth-year MATH major.

The future of other strict voter ID laws remains uncertain as  officials work to reconcile the conflicting sides of the issue.

“Preventing illegal voting is important, but we should make sure that everyone with the right to vote can, whether they have a photo ID or not,” said Lauren Rothmann, a first-year AE major.