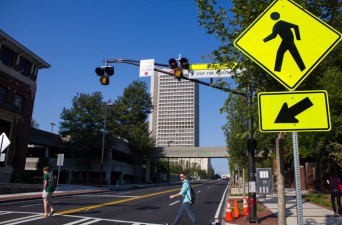 One visible change on campus this year has been the addition of the North Avenue High-Intensity Activated Crosswalk (HAWK) Pedestrian Signal.

The crosswalk traverses North Avenue in front of the Alumni House, and it is accompanied by a traffic signal that responds instantaneously to pedestrian requests. This traffic signal directs automobiles to come to a complete stop to allow pedestrians to cross the street.

After five months of operation, the signal has received a positive reception from Tech students and police officers alike.

“We have almost 2000 students in North Avenue apartments, the addition of the dining hall, the Alumni Faculty House. That area of campus was where we had the highest incidence of pedestrian-vehicle accidents,” said Georgia Tech Police Department (GTPD) Police Captain Regina Rogers.

After the installation of the HAWK signal, the GTPD has noticed a dramatic reduction in accidents on North Avenue. “We’ve had no [pedestrian-involved] accidents reported since the HAWK signal has been installed,” she said. “The numbers are really down, and that tells us that the signal is being effective.” Rogers believes that the pedestrian situation at North Avenue has improved “tremendously.”

In fact, in the five months that the signal has been in use, there have been few violations at the crosswalk.

“We’ve only had six citations since June 1,” Rogers said.

All six citations were given to motorists for failing to obey the HAWK signal.

Many students agree with the GTPD’s assessment of the crosswalk.

“I think it’s great…I’m always really scared that I’m going to get hit by cars next to North Ave., and this definitely makes it so that I feel safe when I’m crossing,” said Camilla Dartnell, a second-year ENVE major.

Other students also believe that the signal helps to make their commute safer.

“I definitely like crossing here rather than [at Techwood Drive]. I like it better than a major intersection,” said Austin Sanderson, a second-year MSE major.

However, some students question the efficiency of the new signal. The timing of the signal’s lights can often cause traffic to back up during busy times of the day.

“There are some people who skip waiting for the lights. It can mess with traffic a little bit,” said Blaise Hymel, a third-year CS major.

Letting drivers know when all students have crossed is also a concern.

“It’s nice, but maybe it could be tweaked a little bit to be more efficient. It would be better if there was a way to signal once people have crossed the street so the cars can go again,” said Daniel Watts, a third-year BA major.

Although the buildup of automotive traffic could be alleviated if the crosswalk system were altered in this way, the current window during which pedestrians can cross before drivers are given the go-ahead may be an adequate compromise.

While the HAWK signal has been generally well received by the campus community, the likelihood of another such signal being installed in other  busy, high-traffic areas frequented by pedestrians is currently slim.

When asked whether there were any plans to install similar signals around campus, Rogers replied that there are none at this time.

“We contracted with an outside company to study the traffic flow and pedestrian traffic on North Avenue. We studied [the situation] for about three years before we actually installed it. It’s a really involved process to install one of these HAWK signals because it has to be approved by the Georgia Department of Transportation,” Rogers said.

Despite the signal’s immediate success, Rogers cautions students to be careful while using the HAWK signal at North Avenue. Particularly at intersections in high-traffic parts of campus, drivers can be unpredictable and neglecting to take proper precautions  when crossing the road could be a potentially fatal decision.

“Not all vehicular traffic will obey the light, which is why we’re out there for enforcement purposes. People still need to use caution. Just because you’re in the crosswalk doesn’t mean someone’s going to stop for you,” Rogers said.